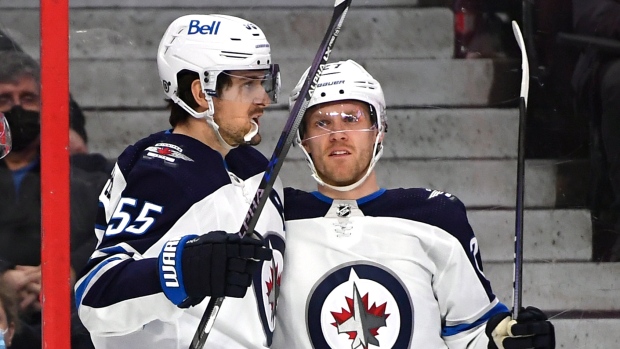 OTTAWA — The Winnipeg Jets needed a reminder that the season isn’t quite over and they responded with a 4-3 win over the Ottawa Senators Sunday night.

The Jets looked like a disinterested team after the opening 20 minutes, but a harsh talking to seemed to do the trick to get everyone back on track.

“We got yelled at after the first,” said Paul Statsny, who scored the Jets' third goal. It woke everyone up. We’ve been needing that for a while, so it was just good to have.”

Nikolaj Ehlers had a goal and two assists, while Pierre-Luc Dubois scored his 100th NHL career goal and Kyle Connor’s third-period goal proved to be the winner.

The Jets will be without Mark Scheifele for Monday’s game in Montreal. Scheifele suffered an upper body injury in the second period and will be re-evaluated in Winnipeg.

The Jets (34-28-11) likely would have ended up on the losing side of things if not for the play of Connor Hellebuyck, who made 31 saves.

Trailing by a goal late in the third the Senators pulled the goalie and Hellebuyck made some huge saves to keep this one from going to overtime.

“That’s probably the best we’ve looked six-on-five,” said Senators coach D.J. Smith. “We haven’t been very good six-on-five and we were dangerous and had chances. That’s why Hellebuyck is one of the best goalies in the league. If you get an average goalie in there we may get five or six tonight.”

There was no denying who the best player of the night was in interim head coach Dave Lowry’s mind.

“That’s a goalie win,” said Lowry. “He gave us a chance in the first period. He legitimately was probably the only guy that started on time. He gave us a chance to get going and then he made some huge saves right at the end of the game for us, as well.”

Captain Brady Tkachuk led the way for the Senators (26-40-6) with a pair of power-play goals.

Tim Stutzle returned to the Senators lineup after missing the last two games, while Drake Batherson missed his third straight due to a non-COVID illness.

This was the first time Stutzle addressed the media since last week’s game in Montreal when he was hit by Nick Suzuki and later criticized by Brendan Gallagher.

“I respect (Gallagher) as a player, I mean everyone has their own opinion,” said Stutzle. “They can say what they want. I have my own opinion too, but in the end, like I said I respect him as a player. He’s a veteran player so that’s all I want to say about him."

The Senators were coming off a disappointing 5-1 loss to the Rangers Saturday night and were anxious to redeem themselves.

“We really wanted those two points tonight and as you can tell we were fighting to the very last second,” said Tkachuk. “This one’s going to be a frustrating one, but we have to move past.”

Tkachuk made things interesting, scoring his second power-play goal of the game with six minutes remaining. He whacked the puck out of midair and, following a lengthy review, the goal stood.

Tkachuk was a threat down low all game and has shown to be an effective net-front presence.

“I pride myself as that’s where I feel I’m at my best is around the net causing chaos with pucks landing and just be hungry and try and put them in the back in the back of the net,” said Tkachuk. “But all those plays don’t happen without teammates getting it there and making good plays around the net, shots, tips and we have a lot of guys who sacrifice in front of the net.”

After getting yelled at, Winnipeg jumped out to a 3-1 lead after two periods.

Dubois picked up his 100th NHL career goal on the power play early in the second when he took a pass right in front and beat Sogaard far-side.

Ehlers and Stastny had a beautiful two-on-one that finished with Stastny scoring his 19th of the season.

Despite being outshot 12-5 the Jets managed to come out of the first period tied 1-1.

Ottawa opened the scoring in the first two minutes when Brady Tkachuk dropped a pass back from below the goal line to Norris out front for his 32nd of the season.

The Senators did a good job keeping shots away from their young goaltender, but he didn’t have much chance on Ehlers's goal. Ehlers looked to make a cross-ice pass, but it deflected off Victor Mete’s stick and skipped past Sogaard.

NOTES: Various members of Canada’s Olympic team, including Marie-Philip Poulin, were part of a pre-game ceremony ... Ottawa D Michael Del Zotto was a healthy scratch in favour of Mete ... Blake Wheeler missed his second straight game and is doubtful to play Monday in Montreal.