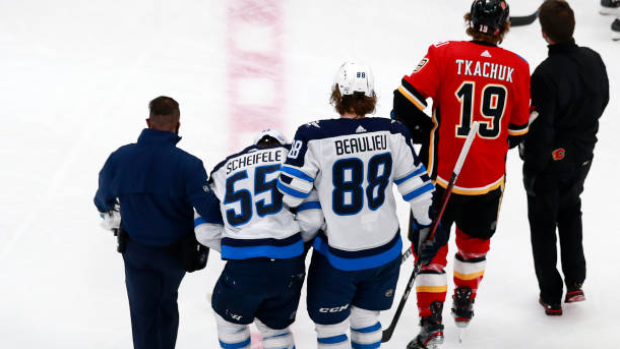 Winnipeg Jets centre Mark Scheifele spoke to the media Tuesday for the first time since being injured in Game 1 of his team's play-in series against the Calgary Flames, stating he does not believe Matthew Tkachuk intended to cut him on the hit that knocked Scheifele out of the series.

Scheifele said he believes Tkachuk was out of control as he attempted to hit him along the boards and adjusted to try to get a piece of him.

Mark Scheifele expects to be back to 100% soon and will be ready for next season, whenever that is. Does not believe Tkachuk injured him intentionally. Wishes it never happened but no hard feelings. #TSN #NHL #NHLJets

The Jets forward declined to reveal the exact nature of the injury, but said it was not his Achilles and that he expects to be back to 100 per cent in the near future.

"I'll be good as new soon. That's the only thing that's been on my mind is that I'm very thankful that it wasn't as bad as it could have been," said Scheifele, who added Tkachuk reached out to him after the incident.

Scheifele says Tkachuk was out of control and tried to get a piece of him. Tkachuk reached out afterwards.

"I'll be good as new soon. That's the only thing that's been on my mind is that I'm very thankful that it wasn't as bad as it could have been."

Tkachuk called the injury "an accident" after Game 1, adding he "felt terrible." Jets coach Paul Maurice, however, called out Tkachuk for delivering "a filthy, dirty kick to the back of the leg."

"The way my parents raised me is you forgive everyone and that's all you can do," Scheifele said Tuesday. "You wish the best on every person."

The Jets, who also lost star winger Patrik Laine in Game 1, were eliminated in four games by the Flames, missing the playoffs for the first time since 2017.