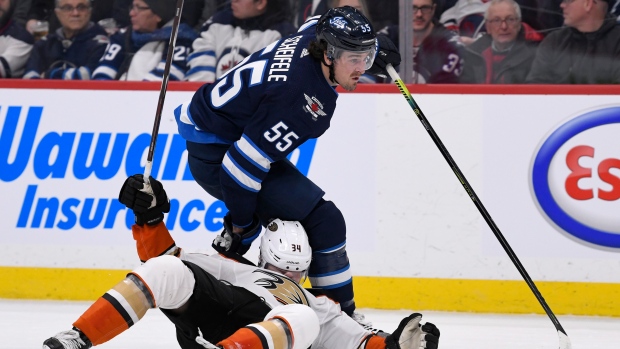 The 28-year-old tested positive for the coronavirus Wednesday morning, but is asymptomatic and has since tested negative.

Scheifele will be eligible to come out of protocol and play Thursday night in Winnipeg's home opener against the Anaheim Ducks if he produces another negative test prior to puck drop.

"We would have game-time decisions all the time," Jets head coach Paul Maurice said following his team's morning skate. "The difference is if a guy's got a pulled groin, you don't have to worry about it spreading to the guy who sits beside him on the plane."

Scheifele is the second Winnipeg player to test positive for COVID-19 this week after captain Blake Wheeler was put in league protocol Monday with the team in Minnesota prepping to take on the Wild.

Wheeler, who was symptomatic after testing positive, and the Jets opened their season with games in Anaheim and San Jose, Calif., last week.

All of Winnipeg's players are vaccinated.

According to the NHL's rules for the 2021-22 season, Wheeler must isolate from the club for at least 10 days and will require a doctor's approval to return once he's symptom-free.

Scheifele and Wheeler make up two-thirds of Winnipeg's top line with Kyle Connor.

"We're not surprised by anything," Jets centre Paul Stastny said. "The trainers gave us a warning that there might be a trickle down. So whether more guys go in protocol or not, I think we'll be ready for it. Not as nervous as what you would have been last year.

"It's unfortunate times right now, kind of unforeseen. But nothing comes easy in this world."

Jets defenceman Nate Schmidt tested positive for a second time with Vancouver last season when the Canucks had a massive outbreak that impacted 21 players and four coaches.

"This is going to be our reality across the league," he said. "It's part of what we have to deal with.

Scheifele tied for second on the team with 21 goals during the NHL's pandemic-shortened 2020-21 campaign, and led Winnipeg with 63 points.

The native of Kitchener, Ont., has two assists in two games this season after sitting out the Jets' opener as he served the final game of a suspension handed down during last spring's playoffs.

Maurice said his team will be prepared to play with or without its No. 1 centre against the Ducks.

"We're gonna wait for a test," he said. "We've got two lineups and two plans and two power-play groups. Mark's in the protocol now, so we're going down one direction.

"If we get good news on Mark here then we'll just quickly switch."