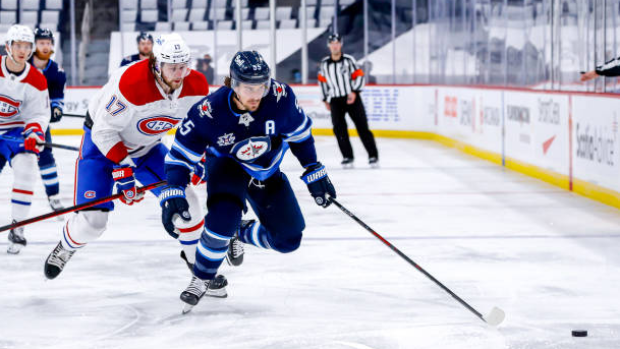 Winnipeg Jets forward Mark Scheifele made it clear Wednesday he still does not agree with the four-game suspension he received for charging Jake Evans of the Montreal Canadiens in Game 1 of the team's second-round series.

Scheifele, who called the suspension "pretty excessive" last week, missed the remainder of the Jets postseason as they were swept in four games by Montreal and will still have one game to serve at the start of next season.

"I thought I was going to be tried to be shut down by Phillip Danault," Scheifele said Wednesday. "Instead it was the Department of Player Safety that shut me down."

"I'm going to stop talking before I get fined or something like that," Scheifele added.

"I thought I was going to be tried to be shut down by Phillip Danault," says Mark Scheifele. "Instead it was department of player safety that shut me down."

Scheifele elected not to appeal to league's ruling on the incident, which also kept Evans out of the remainder of the series with a concussion.

The 28-year-old centre also praised the Jets success over the course of the season on Wednesday, stating the team overperformed in the eyes of the media.

"We were written off from day one of the season and we proved people wrong all season long," Scheifele said. "We go through that slide towards the end of the year and we were written off again ... We don't get a lot of respect in the grand scheme of things."

Scheifele posted two goals and three assists in five postseason games this year. He had 21 goals and 63 points in 56 games with the Jets during the regular season.