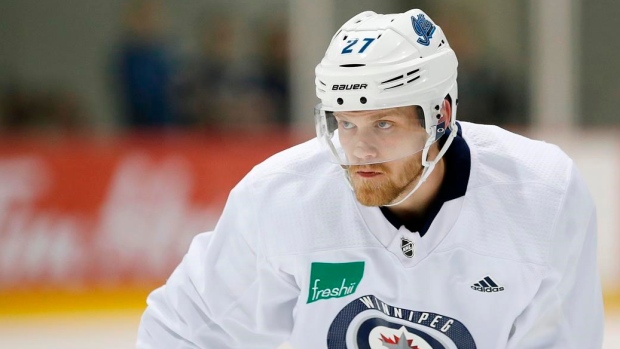 Late at night this summer, after Nikolaj Ehlers had already skated, worked out, golfed and spent time with friends and family, he'd turn on his iPad.

The winger for the Winnipeg Jets wasn't binging the latest Netflix series or cruising social media.

Instead, Ehlers rewatched every game he played last season.

What the 23-year-old saw staring back at him weren't huge problems, but minor issues that, when added up, could help explain why he produced a career-low 37 points in 62 outings.

The son of a coach, Ehlers noticed his stick was sometimes in the wrong spot on the forecheck, his lack of patience with the puck, a need to shoot more and wayward defensive positioning.

"There's a lot of small things," Ehlers said. "It's something that's hopefully going to help me."

The off-season is usually a time when players unwind. Ehlers was the opposite. The ninth pick at the 2014 NHL draft found it difficult to unplug from a frustrating campaign that included a 20-game absence with an upper-body injury.

Just six of his 21 goals came after returning on Feb. 22, and he failed to record a point in Winnipeg's six-game loss to the St. Louis Blues — the eventual Stanley Cup champions — in the first round of the playoffs.

All told, Ehlers has just seven assists in 21 career post-season appearances, including when the Jets made it all the way to the Western Conference final in the spring of 2018.

"I'd be lying if I said it didn't touch me at all," he said at the NHL/NHLPA media tour in Chicago earlier this month. "Not scoring in the playoffs sucks. There's no other word for it. It sucks ... but it's not like I get to the playoffs and I just shut myself down.

"I work as hard as I can to help this team win every single day."

It didn't help that last season was the first of a seven-year, US$42-million contract Ehlers signed in October 2017.

It's his hope a summer of studying will help him rebound.

"Most of these things, I'd say 90 per cent of them, are things that I've seen in my game more than once," Ehlers said. "If it's only in one out of the 62 I played last year, then I'm OK. But if it's something that I see more regularly then I remember it.

"I'll know what it is and I'll look for it the next game that I watch and see, 'OK, you're doing it again.'"

Jets head coach Paul Maurice said it's important for players of Ehlers' stature — he stands six feet and weighs 172 pounds — to figure out ways to be effective in all three zones, not just on offence.

"Each player has to be able to get combative and win battles and win pucks on the wall," Maurice said recently in Winnipeg. "For slightly-built young players, that's an awfully big challenge and there's a long learning curve.

"This guy's going to score, I don't know, 20 to 40 goals over the course of his year, I think really consistently for us. Where his minutes come up is durability and effectiveness away from the puck. And in order to do that, you've got to put the time in and I think he did."

Bryan Little, who's played on a line with Ehlers the majority of his career in Winnipeg, could sense the Dane's frustration last season.

"I can totally see him sitting down and watching games all summer long and studying it," said the 31-year-old centre. "He's definitely one of those kids who's a student of the game and likes to learn, so that's pretty cool to hear.

"It shows how much he cares and wants to get better."

The Jets also need to be better after last season's stumbles that saw them regress from 114 points and the conference final to 99 points and that disappointing first-round exit.

"The expectations were just very high," Ehlers said of 2018-19. "As professionals, we're supposed to handle that, and I think we do know how to do that. We don't know what happened last year. No one knows.

"I wish you could just figure it out, move on and fix it."

That will have to happen with a much different roster.

Workhorse defencemen Tyler Myers and Jacob Trouba are no longer in the Manitoba capital, restricted free agent wingers Patrik Laine and Kyle Connor remain without contracts, and imposing veteran blue-line force Dustin Byfuglien is away from the team on personal leave.

Not unlike the way he focused on himself — iPad in hand — this summer.

— With files from Judy Owen in Winnipeg.