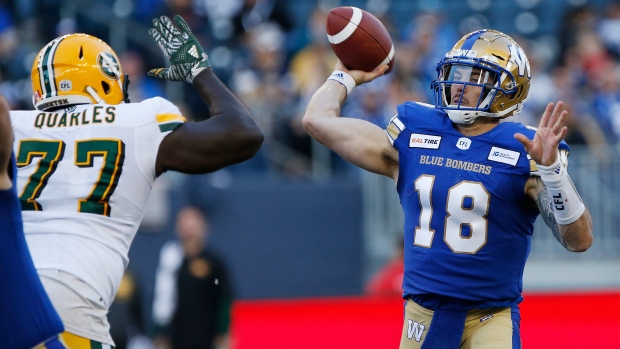 The Winnipeg native caught a late 48-yard touchdown pass from Bryan Bennett to seal a Blue Bombers' 20-3 exhibition victory over the Edmonton Eskimos on Friday.

"I'm at a loss for words right now. I can't even really describe it," said Schrot, a 25-year-old product of the University of Manitoba. "My first CFL catch and something I'll remember for the rest of my life, for sure."

Schrot said the ball was bobbling as he was running into the end zone, but he hung on tight to boost Winnipeg's lead at 12:29 of the fourth quarter. In the third quarter, he nixed a potential Edmonton TD on a kickoff return, bolting across the field and knocking his former Bisons teammate, Eskimos receiver Shai Ross, out of bounds.

Justin Medlock booted a pair of field goals and Edmonton conceded two safeties in front of 19,273 fans at the renamed IG Field.

It was a showcase of backup quarterbacks as the Bombers sat starter Matt Nichols and Edmonton's Trevor Harris didn't play after leading his team to a 22-7 pre-season win over B.C. last weekend.

Chris Streveler started for Winnipeg and played the first quarter and a bit into the second, completing 2-of-6 pass attempts for 15 yards and adding two runs for 34 yards. Bennett was 8-of-15 for 122 yards.

Logan Kilgore was behind centre in the first half for Edmonton, going 10-of-19 for 109 yards.

He got to Winnipeg's one-yard line in the first quarter, but linebacker Adam Bighill forced a fumble on a sneak and Bombers' free-agent prize defensive lineman Willie Jefferson scooped up the loose ball as the quarter expired.

"Got down to the one-yard line there and I can't fumble like that," Kilgore said. "He made a great play, so hat's off to him, but learn from that. Got to put two hands on (the ball)."

Medlock made field goals from 46 and 45 yards and then turned the field goal and punting duties over to Gabriel Amavizca Ortiz from Mexico, who connected on a 36-yard field goal.

Streveler had a 26-yard run, including a spin move to gain more yards, that highlighted a first-quarter drive ending with Medlock's 46-yarder at 5:58.

Edmonton's offence took a quick hit early in the second quarter. New receiver Anthony Parker left the field without putting weight on his right foot two minutes into the quarter and was then carted to the dressing room.

Bennett took the reins from Streveler and Winnipeg put up a five-play, 16-yard drive Medlock capped off with a 45-yard field goal to up 6-0. Bennett was replaced by Sean McGuire for the final few minutes until halftime.

Edmonton got pinned in its own end and Kilgore conceded a safety at 12:28, but the Eskimos recovered a Winnipeg punt fumble and Whyte booted a 19-yarder with four seconds left to make the score 8-3 at the break.

Eskimos quarterback Danny O'Brien boosted Winnipeg's lead when he conceded a safety at 8:54 of the third after being sacked by Bombers defensive end Alex McCalister.

After Ortiz made it 13-3 with his 36-yarder at 11:21 of the third, the Eskimos turned over the ball when tight Winnipeg coverage made a pair of O'Brien passes into the end zone go incomplete.