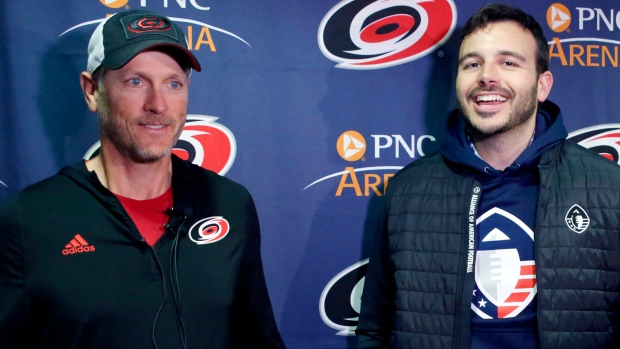 Football in America is a money sport.

From the giant cathedrals built with donor money and rich television contracts that house college football every fall Saturday to the giant coffers of NFL stadiums that hum every Sunday, it is a sport where the rich go to get richer.

And making money is easy. At least it is when you run a league for the best 18-to-22-year-olds in the world and don’t have to pay the players or, like the NFL, you run a professional monopoly on the most popular sport in the country.

Making a buck on football outside of these two entities, however, is an entirely different matter, as we were reminded earlier this week when reports surfaced that the Alliance of American Football was having issues meeting payroll just two weeks into its charter season.

Those reports have been refuted by the league, saying the payroll issue was an administrative gaffe and not related to Carolina Hurricanes owner Tom Dundon deciding to pump $250 million into the league.

Whether that injection was a matter of life or death for the AAF is impossible to know for sure. However, given the checkered history of alternative professional football in America, when a league has trouble meeting payroll for any reason, people are going to wonder.

And with good reason, since the AAF is climbing uphill against the same forces that took down the USFL, the XFL and the UFL before it – that not many people are interested in watching football after the Super Bowl.

The AAF drew a big television audience on CBS for its opening weekend, but the fact the league did not release its second week of ratings reveals how much of that was simply curiosity. Meanwhile, attendance last weekend was so poor in three of the four cities that the league was mocked for juicing attendance figures.

All of which reminds us that for all the popularity football enjoys in America, when you strip away the traditions and the history and when the best players in the world aren’t part of the circus, professional football can be an awfully tough business.

The pure logistics of the sport make it difficult when you are paying the largest number of players with the shortest number of dates of any professional sports league.

Which is something well understood by anyone who’s worked on the business side of the Canadian Football League or any of its teams over the years.

When your easiest point of comparison is a league that does roughly 75 times more in annual revenue than you do, there are going to be times when the CFL looks small-time.

But it’s also worth noting and respecting that it’s the only league outside of the NFL that’s ever been able to come up with a sustainable model for professional football in North America. One that has endured and stood the test of time, even as the world around it has changed dramatically.

The CFL’s revenues may be relatively flat, a reality that will become apparent when the league and its players sit down for collective bargaining next month. But with a strong television contract and six of its nine teams playing in new or dramatically refurbished stadiums, the league’s fundamentals remain strong.

It will never again compete for talent with the NFL, as it once did, and there remain challenges making the game relevant in the country’s three biggest markets. But the CFL isn’t going anywhere.

Starting a professional league sounds easy, as it did when you read all the recent interviews with AAF officials who glowed with optimism at the outset of their opening season, imagining a long and prosperous future for their league.

In fact, operating a professional football league is extremely challenging.

Creating one that lasts is even harder.