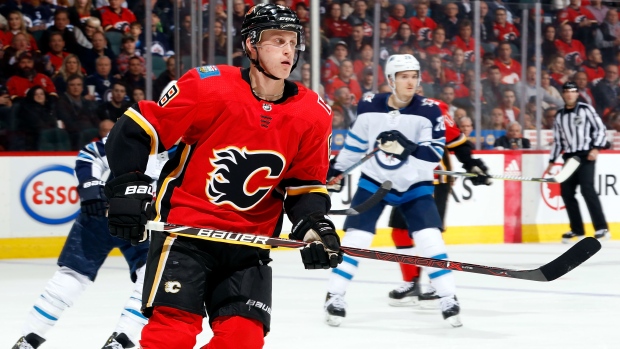 Among a season full of surprises for the Calgary Flames (one of the best starts in franchise history, Andrew Mangiapane being among league leaders in goals, and Jacob Markstrom and Dan Vladar setting an NHL shutout record), one has gone under the radar.

Blueliner Juuso Valimaki, the team’s first-round pick in 2017 and Finland’s captain at the 2018 World Juniors, was demoted to the American Hockey League on Dec. 2, in the middle of his third pro season.

The 23-year-old has had an injury-marred start to his pro career, including an off-season knee injury in 2019 that derailed him for nearly two years.

Coming into this season, the opportunity was open on the Flames’ blueline. Mark Giordano had been selected by the Seattle Kraken in the expansion draft, and the team did not bring in an immediate replacement. Instead, the team planned to rely on internal improvement by its young defence core of Noah Hanifin, Rasmus Andersson, and Valimaki.

But Oliver Kylington emerged early, effectively taking the spot that Giordano vacated. Valimaki, who is waiver exempt, suited up just eight times this season before getting sent to the AHL’s Stockton Heat.

“To this date, I haven’t been able to really bring the full me to the NHL,” Valimaki said. “The type of player I am when I play my best is a two-way player with a lot of offensive upside and power play, that kind of stuff.”

With the Flames currently shut down due to the league’s largest COVID-19 outbreak, Valimaki’s demotion was perhaps a blessing in disguise.

“The biggest thing coming from them is just to play games,” he said, of communication with Flames management and coaches.

“That’s what I want to do, build confidence and build my game. Obviously, there are things Darryl [Sutter] has talked to me about a lot ever since he came in, being quick, hard, and firm, and playing that type of hockey. Obviously, I’m going to try keep working on those things. It’s important for me to try to continue playing NHL-type hockey and not go through the motions.”

Early on, Valimaki has shown those offensive instincts. In six games with first-place Stockton, he has six assists while playing in all situations.

“He’s been thrown to the wolves with our group here, logging lots of minutes and he brings a ton of energy to our group both on and off the ice,” said Mitch Love, Stockton’s first-year head coach. “The biggest thing from Juuso is seeing him play his game. He plays an up-tempo style, he likes to make plays and be a part of the offence, and we want to embrace that.”

Valimaki has not been told if the Flames plan on recalling him soon (a matter complicated by the COVID outbreak) or if he will have an extended stay in Stockton. Instead, he is focusing on improving in all areas of his game.

In Calgary, he rotated with Nikita Zadorov on the team’s third pairing alongside veteran Erik Gudbranson. In Stockton, he’s had a rotating cast of partners – most recently, Colton Poolman.

Should Valimaki eventually earn back Sutter’s trust and draw into games with the parent club, he’ll have to get better defensively. Love has already noticed some changes.

“I’ve seen a big improvement in just a couple of weeks in his stick work in defensive play,” he said. “Him using his brain and feet to close on people to kill plays defensively will be very key for him.”

The development curve for blueliners tends to be less linear than for forwards, and Valimaki isn’t the first young defenceman to take time to establish himself at the sport’s top league. He need only to look at Kylington, who was waived last season and is now entrenched on a pairing with Chris Tanev, as an example of a young defenceman with the organization who eventually earned an opportunity.

“A lot of guys who have experience have gone through this and know what it’s like,” Valimaki said. “The biggest thing is just to play hard, and not change my habits. I want to give everything that I have every day, to myself and to the team.”

Love, himself a former journeyman blueliner who played 278 games in the American Hockey League, emphasized that Valimaki needs to show patience with the process.

“I know he’s got NHL experience, but he’s still a young hockey player,” Love said. “He’s still learning about the game and learning about himself and what he can and can’t do in a game in the National Hockey League.”