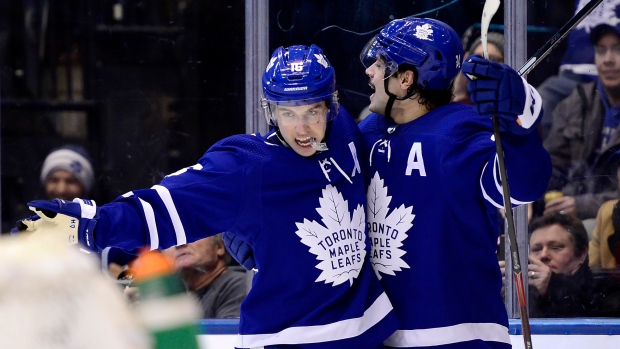 TSN Toronto reporter Mark Masters checks in daily with news and notes on the Maple Leafs. The Leafs and Stars skated at Scotiabank Arena on Thursday.

Sheldon Keefe is giving William Nylander, Auston Matthews and Mitch Marner another chance to play together, even though the new-look line posted underwhelming results in its debut Tuesday.

"I thought the third period of last game [they] started to have some life, which is why I was more intrigued to stay with it today," the coach explained. "It starts with them each playing well individually, and I think if they do that they're just good enough players that really good things are going to happen."

The game against Arizona was the first time the highly skilled trio got an extended look together at even strength and they were outchanced 13-8.

"There's a lot of potential," said Matthews, who did have six shots on net in the overtime win. "You look at all three guys, lots of talent there, but we’ve never really played together five-on-five, so it’s a bit of an adjustment. But it will be interesting to see with the more games and reps we get how well that can mesh. I guess you don't really know until you try it."

"It's huge," Nylander said of the potential for the line. "That was lots of fun. It's the first time we’ve played together, so we'll work on building chemistry there and felt good this morning and we'll build off that. When me and Auston used to play together we had a lot of chemistry, and then Mitch has, obviously, been playing really well with Auston, so hopefully I can help them out there a little bit."

With so much talent on one line, the focus is on sharing the puck and not getting too fixated on offence.

"We just got to move the puck between each other and keep the puck doing the work," Nylander said.

"Just competing, making sure we’re playing well on both sides of the puck," Matthews said. "I think that's kind of the key thing for us, making sure our back pressure is good and being in good spots for each other, supporting each other all throughout the ice so we can get the puck and go the other way."

One problem on Tuesday was Nylander's lack of energy. The winger had missed the previous two games due to a high fever. He skated again yesterday even though the team had a day off and is feeling much better.

Keefe warned the line to "not overdo it" against the stingy Stars.

"If they're ready to play individually, I think they'll be in good spots," Keefe said. "What I’m looking for is just generating scoring chances, having the puck and not hurting us."

The defensive-minded Stars, who have given up the third-fewest goals in the league (2.5 per game), hope to make Toronto's big boys pay on the counterattack.

"I'm sure they play good defence," noted centre Tyler Seguin, "but when they're in the offensive zone they'll wait around an extra second to see if the puck will get turned over so you can sometimes use that to your advantage. Just play them hard, defend them hard and usually you get some odd-man rushes."

Dallas failed to contain Toronto's attack during a 5-3 loss just a few weeks ago in Dallas.

"A game we didn't play that well," Seguin recalled. "We got away from our identity and gave into their style. Their neutral-zone play, the way they control pucks, is something you don’t see that often."

Keefe revealed that it was Nylander who approached him and asked to get a look on the left side.

"I like playing on the left side," the 23-year-old said. "I've always played left; I never played right until I got here."

So, when Keefe rejigged his lines and put Nylander with John Tavares a month or so ago, the coach asked Alexander Kerfoot to play his offside to accommodate the Swede's request.

"It really helps on breakouts," Keefe observed, "because you get the puck under a lot of pressure, but when you're playing on your off side immediately when you get it you’re looking at all your options right away. Where if you're on your strong side and pressure comes, you can kind of get blinded by that and closed off. It also helps him on the entries on his pull-ups and delays and those sorts of things ... he has been more engaged in a lot of different areas since we've given him the go-ahead to try that left side over the last month and we’ve seen some good results."

When the media entered the Leafs dressing room after the morning skate, the initial word was that Frederik Andersen would not speak with reporters. Then, a couple minutes later, Andersen emerged and declared he’s ready to return from a neck injury.

"I've been feeling good, being patient, I think I feel ready to go again," said the goalie, who was injured in a game against Florida on Feb. 3. "It's been a nice little process to make sure (we) hit the things we needed to and get ready."

Is the injury 100 per cent healed or is this something he'll have to manage?

"I'm ready to play so that's really all I’m going to say. I'm not going to go into specifics, but, yeah, good to go."

Considering the layoff, Keefe admitted there is some curiosity to see how Andersen responds tonight, but the coach also said there was no discussion about sticking with ex-Star Jack Campbell, who looked good in the last three games.

"If Fred says he's ready and heathy we want to get him going," Keefe said. "He's put in a lot of work and I think he was very close to being ready the other night and just made the decision to give him a little more time so I fully expect he'll be ready to go."

Stars forward Andrew Cogliano recalls Andersen playing through pain with success during their time together in Anaheim.

"In the playoffs, I remember him having a couple of things, maybe one was his knee," Cogliano said. "Freddie's got every aspect of a hockey player in him and I don't think [there is] a better goalie for this market or this team. He's a goalie that doesn't maybe say it out loud, but wants to be the best in the league and is very competitive in terms of being a person that really wants his team to lean on him."

Andersen and Cogliano are close friends and speak almost every week despite now playing on different teams. And it's also a big night for Cogliano who will be suiting up in the 1,000th game of his career.

"Just the ultimate professional," Andersen said of his pal. "That [term] gets thrown around a lot, but I never met anyone that it fits better than him. Just the passion for the game. He lives it and breathes it and just the ultimate team player as well. He doesn't care about how many points he gets or anything like that. He's out there to do his job."

Cogliano, a Toronto native, noticed about 10 games ago that he'd be entering the four-digit club in his hometown. He said he'd have a lot of family and friends in attendance.

"I bet there will be people that I don't even know are here," the 32-year-old said. "To play my 1,000th game here, I never envisioned that when I started my career and it’s going to be something special ... You can't find a better job."

It's also a milestone night for ex-Leaf Roman Polak who is playing game No. 800. The burly defenceman declined an interview request, but not before noting that Cogliano's milestone is more impressive. Polak then smiled and said he's unlikely to make it to 1,000 games.

----
Seguin has not scored since Dec. 28, a run of 17 games without bulging the twine. It's a career-worst drought.

"It's been tough at times," he admitted. "I've never experienced something like this. There was a stretch where I started changing a little bit as far as getting away from my game. Even the last time we played the Leafs I was thinking about goals a lot, and as of late I’ve not been getting discouraged. I’ve been playing some great hockey, so sticking with that and know they're going to come."

Seguin, who has 62 shots and 10 assists during the dry spell, has been fielding calls and texts from concerned friends and family.

"I tell them all, 'Guys, I'm fine, grinding through it,'" Seguin said with a smile. "Our team's playing well and I know I’m contributing to that."

"The most important points are the two points the team gets," said interim Stars coach Rick Bowness. "That's what we're selling. Tyler's doing a lot of things that help us win games. He's winning a lot of faceoffs, he's getting scoring opportunities, doing a great job on the power play ... Jamie (Benn) got three the other night and Tyler's pretty close to breaking out as well."

This is a homecoming trip for Seguin, who would love to rediscover his scoring touch in a building where he attended games as a kid.

"That would be phenomenal, yeah," he said. "I've never gone through a drought like this so I’m just going to stand in front and hopefully something goes off me."

During the anthem tonight Seguin will continue a tradition of looking up and to the left at his old seats at Scotiabank Arena.

"I was saying to my friends last night, I was driving to Brampton to have some home cooking and I said to them, 'I kind of miss the nerves from a few years ago coming in here,' it was kind of exciting," he said. "But it's still going to be special I’m sure, looking up – especially during the anthem."

Seguin has registered at least one point in his last four games in Toronto.

^ Likely placeholder for Robertson, who wasn't at the skate