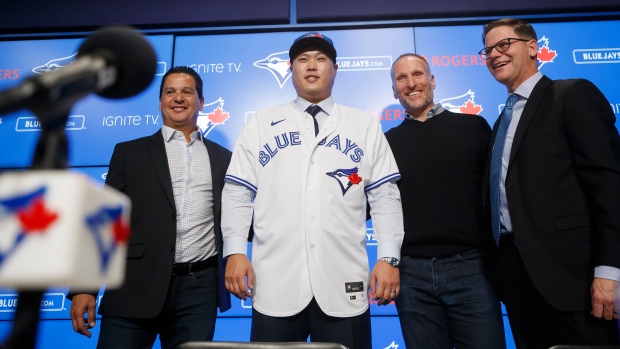 TORONTO — A few minutes after Hyun-Jin Ryu donned a Toronto Blue Jays jersey with his customary No. 99 stitched onto the back, Scott Boras, as usual, provided the quip of the day when it was noted that the number has some significance in this country.

“Actually, Canada lent No. 99 to L.A., so we thought with Hyun-Jin we’d return it back to Canada,” Ryu’s agent said with a grin as the club was unveiling their prized free-agent acquisition Friday evening at Rogers Centre.

It captured the feeling of the day perfectly.

Inside a press conference room packed with media, a large portion of them with South Korean interests, it was a scene filled with smiles and positivity as the four-year, $80-million contract the Jays handed the 32-year-old lefty became official after he passed his standard physical.

These types of days have been few and far between for the organization since 2016.

While Ryu is just beginning, one of the first pieces the Blue Jays’ front office tandem of GM Ross Atkins and president/CEO Mark Shapiro have imported to surround their core of homegrown kids, Friday’s introduction of the team’s new ace still felt like a turning point.

It remains to be seen if the fork in the road the franchise took this winter will result in a contender - only time will tell - but the focus shifting is exactly what the fan base has been waiting for since it became readily apparent early in the 2017 season that something drastic had to be done with a roster that got old almost overnight.

Two-and-a-half-years later, the days of tearing down are officially done.

From here on out, it’s about building back up.

When Boras, the most powerful agent in sports, believes it and has two months of behind-the-scenes evidence to build his case — plus $80 million shreds of green evidence — everyone else should believe it, too.

One year after playing the role of family physician and diagnosing the Blue Jays franchise with the “Blue Flu” due to their lack of spending, Boras, who has secured his clients over a billion dollars in contracts this off-season, gave them a clean bill of health this time around.

“Certainly, a little Korean soup has cleared them of the Blue Flu, that’s for sure,” Boras said.

“I think it signifies, particularly to the organization and the fans in Toronto, that they’re now at that point where what I call the Royal Youth (Biggio, Bichette, Guerrero Jr.) has arrived and the team as a whole is ready for a No. 1 pitcher.”

The Ryu investment is easy evidence of the Shapiro/Atkins plan entering its next phase.

The phrase “opportunities and alternatives” has become a bit of a punch line around these parts over the past couple years, with Atkins using it time and time again to deflect from the club’s blatant strategy to do as little as possible in free agency until the time was right.

“Now, it’s the beginning of a layer cake for the playoffs, where now players look at this team differently for opportunities in free agency going forward, in trades going forward,” Boras said. “I think it’s clear that the Blue Jays are now that much closer to a playoff-calibre team.”

When it came to Ryu, the Jays flipped the script on the “opportunities and alternatives” narrative.

Not only did they get their man by tacking on a fourth year, they were also persistent in their chase of the veteran southpaw, identifying Ryu as a target early on in free agency and not letting the Boras camp forget about them.

They didn’t swing and miss on five other rotation options before circling back to Ryu.

He was the target.

There were rumblings early this off-season that the Blue Jays had been relentlessly aggressive behind the scenes in the opening days of free agency, checking in on everything from the top tier to the bottom tiers, and at multiple positions.

That was fairly met with skepticism — especially from those who had paid close attention to the previous four winters, all marked by relative inactivity — as starting pitchers started to come off the board quickly in early December.

Boras said the Blue Jays front office called him repeatedly on Ryu, as many as “nine or 10” times, and that persistence did not go unnoticed.

“Toronto was engaged from the very get-go of free agency and there’s a lot of great younger players on this team, so that’s why I came to Toronto,” Ryu said Friday.

The annual winter meetings from Dec. 9-12 were the turning point, with Shapiro and Atkins hunkering down for a long meeting with the Ryu camp inside a Manchester Grand Hyatt suite in San Diego.

“It was very apparent that they had focused in on Hyun-Jin to sign him and were very serious about it,” Boras said. “That was communicated to Hyun-Jin and I think it’s a human dynamic — their persistence and their interest was something that he took notice of and he did a lot of study on the city and the team and gave me the okay to pursue reaching an agreement with them.”

The feeling was mutual.

As Ryu learned more about the Jays, the franchise, and Toronto, the city, Atkins & Co. continued to find reasons to push their chips in even further on the lefty that led baseball with a 2.32 ERA and finished second in National League Cy Young voting.

“He’s masterful as a pitcher,” Atkins said. “The more we dug, the more we learned, the more we liked him. Our sights were on him early and we kept them on him. He’s an exceptional athlete that can get outs in all quadrants of the zone with four different pitches and he can do it in different ways, to different hitters.”

Despite the big-money signing and the ensuing smiles from all involved, don’t mistake the Ryu signing with immediate contention.

There’s still internal options to sort out — is this really the outfield of a contender? Not a chance — and another winter of using some of Rogers’ financial clout to add more impact a year from now is needed.

The Jays won’t be going from 67 wins to 90, even if the unexpected has happened in this sport before.

But just like you could dream on a lineup with three sons of former big league all-stars prior to last season, you can now dream on a rotation headlined by Ryu and top prospect Nate Pearson starting to come together in the second half of 2020, providing hope that legitimately meaningful baseball could be played deep into September in 2021.

What should the investment in Ryu signify to the paying public?

“That we’re taking the next step,” said Atkins, correctly going the route of tempering immediate expectations. “The younger group transitioned and transitioned well, and now we need to go from being a team that’s not just competing but winning, and he will certainly help us do that.”