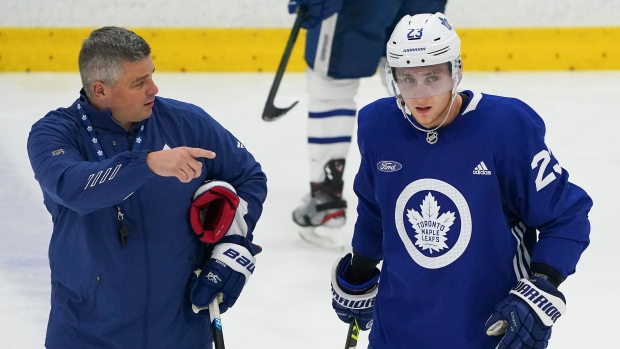 The Maple Leafs held an optional skate at the United Center in Chicago on Wednesday.

The Leafs have scored just 13 goals in seven games this season (27th in the NHL), but Sheldon Keefe believes improving defensively is the key to snapping an early season slump.

"We've given up too much in the last few games," the coach said. "The biggest takeaway for me the other night in Carolina is we gave up too much easy access to our crease and to our goaltender and got none the other way, and that's really the recipe we're looking for … That's what it should feel like playing against us and it hasn't been the case."

Jason Spezza says Toronto's defensive detail started slipping after the team ran into some hot goalies. The current four-game winless skid (0-3-1) started when Igor Shesterkin stopped 40 of 41 shots during an overtime win by the Rangers in Toronto. Wayne Simmonds, another veteran forward, senses the same thing.

"In trying to get that offensive game going we've kind of left ourselves wide open defensively," Simmonds said. "We got to be comfortable winning games 2-1, 3-1, 1-0, whatever it is, until our offence gets going. There's no shame in that. We got a lot of firepower on this team. We know it will come around. We have to stick to the foundation of our game."

Since Auston Matthews and Mitch Marner joined the Leafs, offence has rarely been an issue. Toronto averaged 3.3 goals per game (third overall) in their first five seasons in the league. During that same stretch, the Leafs allowed 2.91 goals per game (19th overall). The key reason the team was able to take a step forward in the regular season and finish first in the North Division last year was because they clamped down defensively, allowing just 2.64 goals per game (sixth in the NHL).

"We got to stick to what we were doing last year and get back and not cheat for offence," said Simmonds.

"It's not necessarily cheating so much as it is the mindset," Keefe noted. "You're so focused on where the puck might go next offensively that you give up some of your defensive posture."

This season, the Leafs have allowed 3.29 goals per game (21st overall).

Like during the playoffs, Marner has become the face of Toronto's struggling offensive play. Remarkably, he has not been on the ice for an even-strength goal by the Leafs this season.

"It's a long year," Simmonds stressed. "People have dry spells here and there, but that doesn't make your year. It should make you a little more focused to do other things in the game well. I think those guys know that."

Marner's point drought extended to six games on Monday in Raleigh, where he also took a stick to the face and lost a tooth. It's given the winger a different look.

"He's a little bit of a pretty boy," Simmonds said with a chuckle. "He looks a little bit funny with that one big tooth and the other, like, jagged one is there, but ... He's dealing okay with it."

Keefe is more concerned about what's going on between Marner's ears.

"You got to talk to him and reassure him of the good things that he's doing, give him opportunities to succeed in terms of his ice time and the situations you're putting him in," the coach said. "The focus when I'm talking to any of our players that are looking to break out here is bringing it back to the team and relying on our structure and playing together as a group and then opportunities come from there. The players are just too good to not produce over time, so [don't] put too much on yourself. Recognize your role and responsibility in each area of the ice and do your job for the team."

Marner has not spoken with the media since Monday's loss.

It's only the eighth game of the regular season, but it feels like this is already a huge moment for the Leafs.

"I think we have to win," said centre David Kampf, who is returning to Chicago after playing the last four seasons with the Blackhawks. "It's a big game for us and hopefully we will do it. We are ready. We had a good practice yesterday."

The Blackhawks are in worse shape than the Leafs these days. Chicago hasn't won yet this season (0-5-1). They haven't even held a lead.

A loss tonight and the Leafs will face a deluge of negativity when they return to Toronto to start preparing for Saturday's home game against the Detroit Red Wings.

"We're not playing the best right now and we're going hear it from every different angle," said Simmonds, a Toronto native. "We know what we got in that room. We got full belief in ourselves and that's it. We're not really listening to what the naysayers are saying. You can say whatever you want, but we got full belief in ourselves and the guys who are sitting next to us, so that's what we're going with. We're going to play for one another."

The Blackhawks are missing several key players, including captain Jonathan Toews and Patrick Kane, who are in the COVID protocol. It also appears like the Leafs will avoid Vezina Trophy winner Marc-Andre Fleury tonight. Backup goalie Kevin Lankinen was first off the ice at the morning skate and is the projected starter.

"We look no further than the start of this trip in Pittsburgh and it's very clear that any team in the league, regardless of who's in or who's out, is capable of beating you if your own game is not in order," Keefe said.

Keefe confirmed he will not be making any lineup changes tonight.