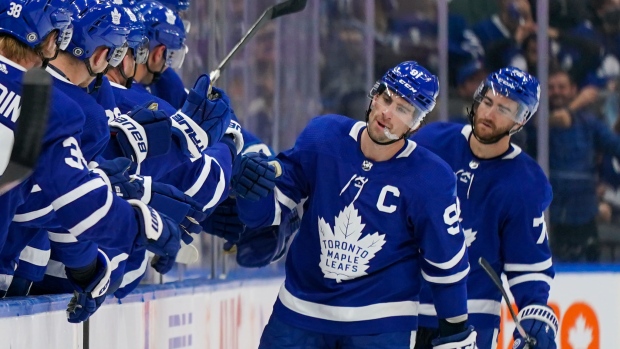 TSN Toronto Reporter Mark Masters reports on the Maple Leafs, who practised at the United Center in Chicago on Tuesday ahead of Wednesday’s game against the Blackhawks.

The Leafs are winless in four straight (0-3-1) and John Tavares has been a minus player in each game.

"Clearly, we recognize we're in a rut and we got to work ourselves out of it and find some more consistency in our game starting with myself," the centre said following Tuesday’s 40-minute practice.

Throughout his career, the 31-year-old has been a model of consistency. In the 11 years since his rookie season, Tavares has produced between 0.85 points per game and 1.1.

Tavares is stuck on one goal and two assists so far this season. The three-point total matches his lowest seven-game output to open an NHL season. Like the team, the captain can't seem to find the sweet spot in his game.

"For me, it's not getting too hung up on the results on a daily basis and just how you go about your process and finding areas where you can be better," Tavares said. "It's, obviously, a work in progress."

On Monday, Tavares was reunited on a line with Mitch Marner. He was held to one shot against the Carolina Hurricanes, a season low, but Sheldon Keefe liked the look of the new unit, which included Alex Kerfoot on left wing.

"I thought those guys did some good things," the coach noted. "John hit the post. Mitch had the puck a fair bit in a game where the puck was hard to come by. I was happy with that line, especially watching it back on video. They had lots of good speed on the wings. John found good spots and made little plays around the rink. I didn't think there were many issues defensively for that line. A lot of really good, positive things."

But it's hard to stay positive when the results aren't there. Marner has now gone six games without a point.

"Trust yourself, trust your instincts," Tavares said of the mindset required for him and Marner, "and understanding things just aren't coming very naturally or seem to be really in sync or really in rhythm. So, just trying to simplify the game a little bit."

While Tavares hopes to lead with his play on the ice, he is also making an impact with his voice. Often a stoic figure in games and in news conferences, Tavares is fired up behind the scenes.

"John's a great leader and these are the times when that shows up," said Kerfoot. "We all look to him at times like this. He's someone you want to rally behind and you want to listen to and follow and give a little bit extra for."

The Leafs have failed to convert on 14 straight power-play chances during the last five games.

"We're a little bit out of sorts," Auston Matthews admitted on Monday night. "We definitely need to just simplify and shoot some more pucks. We got to get it, find a lane, and get sticks on it and just have guys converging down low. Right now, even in our five-on-five play, we're looking too much for the pretty play instead of just keeping it a little more simple and getting ugly goals. If we do that, it opens up more space for seam plays."

At Tuesday's practice, Marner and William Nylander swapped spots on the top unit. Marner, who has been playing in the bumper slot for the first time in his career, returned to his usual office on the half-wall and Nylander moved to the middle.

"We just got to be better," Tavares said. "Whether we're changing things up or not, the onus is on us to step up and execute and understand what a difference that can make in a game especially the way things have been going. So, with myself and our group, we obviously have to be better and go out there and find a way to get the job done."

Keefe cautioned that we may not see the new alignment on Wednesday.

"We wanted to get some reps here today with a bit of a different look so that we can have an adjustment if we feel it is necessary," the coach explained. "Obviously, the results haven't been there for us. We can't just continue to do the same thing. It is just giving us another look and another option we may be able to go to. We don't have a great deal of practice time here so we wanted to get those touches in today."

Keefe believes the early-season adversity will ultimately benefit his team.

"Last season, we really didn't face something like this until it counted the most," he pointed out. "We didn't find our way out of that one. We are here. The guys remain committed. I remain confident. I have lots of belief in our group."

Spezza cited the 2019-20 Tampa Bay Lightning as a recent example of a quality team that started slow before achieving the ultimate goal. Tampa posted a 6-4-2 record in October that season and sat at 18-13-4 entering the holiday break.

"They start the year and their captain's calling them out as a group and they play .500 hockey until Christmas and then they take off and win a bunch in a row and win a bunch more in a row and then they lose six of eight going down the stretch and it doesn't faze them," Spezza recalled. "They go into the playoffs and win the Stanley Cup. The good teams, you're going to find a way to get back to a consistent level. If we're a team that we think we are, this will just be a blip and something we look back on as a learning experience."

The Tampa comparison isn't perfect, of course. The Lightning stars had playoff series wins on their resume before eventually breaking through and going all the way. Toronto, meanwhile, has failed to clear the first hurdle in five straight seasons. And, right now, the Leafs look a lot like they did in the final three games during the playoff collapse against the Montreal Canadiens. The players seem tentative and slow.

"You see the best teams in the league, they play the game on their terms most nights," Spezza said. "That's something we can do a better job of is not letting the other team choose what type of game it's going to look like ... The biggest thing is execution. Execution and consistency with our execution. If you look at Carolina last night, they played the same way all 60 minutes, no let ups in their game."

The execution can be better. So can the effort.

"It's just a mentality more than anything," said Kerfoot. "Our work ethic and our focus probably aren't where they need to be. We saw that last night in Carolina, they were just on another level than us."

It's strange to hear players on the Leafs roster, who sounded so determined to wash away the painful playoff memory from last season, speak about a lack of competitiveness.

"Our guys work hard," Keefe clarified. "Our guys compete. You can't survive in the league if you don't work hard. Everyone is working hard, but there is another level to get to. We have yet to get there. That is the reality."

Keefe raised eyebrows by sounding surprisingly upbeat following the 4-1 loss to the Hurricanes. The coach explained that he sees it as a valuable wake-up call.

"When I talked last night about some of the positives that came out of it, it was not just the fact that we did some good things, but it was a real nice example of what it takes," Keefe said. "There were chunks of the game where we matched them and were with them, especially in the early going, but it shows that we have more to give and another level to get to."

Petr Mrazek practised with the Leafs for the first time since sustaining a groin injury during his first start of the season in Ottawa on Oct. 14. Thursday will mark two weeks since the injury, which was the minimum timeline announced.

The 29-year-old goaltender heaped praise on the team's medical staff.

"They take care of me so well," Mrazek gushed. "Outstanding job. I haven't had treatment like that ever before. Thanks to these guys I'll be back sooner than later. It's a totally different level here."

Mrazek is confident the injury won't be a recurring issue.

"That's a subject we talked about as well," he revealed. "What to do different and why is it happening."

The team continues to manage the workload of starter Jack Campbell, who was on the ice ahead of Tuesday's practice working with goalie coach Steve Briere. He then left the ice, in a planned move, following the first drill of the main session.