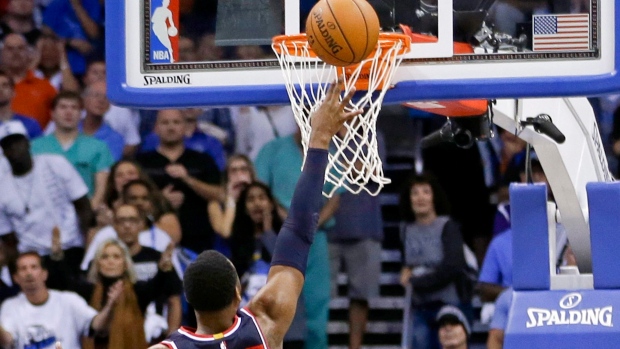 ORLANDO, Fla. - The Washington Wizards spent the preseason getting a feel for the new high-scoring, breakneck pace on offence that coach Randy Wittman wants to be their calling card.

One game into the new season, it's clearly a work in progress.

John Wall hit a floater with 12.7 seconds to play and the Washington Wizards rallied to defeat the Orlando Magic 88-87 Wednesday night in the season opener for both teams.

Bradley Beal led the Wizards with 24 points, followed by Wall with 22 points and five blocks.

"We have a new system. For the first game it was really good but we still have a lot of things we need to work on," Beal said. "But we're 1-0. We just want to continue to stay the course."

The Magic had a chance to win in the closing seconds, but Nik Vucevic's jumper bounced off the rim as time expired.

Orlando built an eight-point lead early on the fourth quarter, before a 12-0 spurt by the Wizards erased it. A 3-pointer by rookie Mario Hezonja and dunk by Tobias Harris capped a 9-0 Magic response to put them back on top 87-82 with less than two minutes to play.

Building on the blueprint that saw them average a league-high 112 points per game during the preseason, the Wizards kept the pace frenetic in the first half.

The results were mixed.

Washington connected on six of its first nine shots, but the Magic absorbed the spurt and generally were able to match the Wizards' energy level in the second half.

"We've got to get in better shape to play at that pace. It's a process. It's different," Wittman said. "We didn't play that way the last couple years, so ... this is Game 1. We've just got to keep working at it."

The game slowed down in the second half as both teams relied more on half-court sets.

The Wizards survived despite going just 15 of 25 from the free-throw line.

TIP-INS: Wall finished with five blocks. ... Washington outscored the Magic 17-12 in fast-break points. ... The Wizards played without Alan Anderson (ankle surgery) and Martell Webster (right hip). ... Wednesday was Wittman's 56th birthday. It marks the first time that he has coached an NBA game on this date. ... The Magic outscored the Wizards 46-30 in the paint. ... Orlando plays five of its first eight games on the road. Five of its first six opponents were playoff teams last season. ... Former Magic forward Hedo Turkoglu (2004-09 and 2010-13) was in the crowd. The 36-year-old spent the past two seasons with the Clippers and is currently not on an NBA roster. He has played 997 career games in 15 seasons.

UNKIND IRON: For all the talk of improved offence, the Wizards struggled mightily from the field in the second half (13 of 39) and shot just 39 per cent for the game (33 of 84). The Magic shot just 37 per cent, despite 100 field goal attempts.

LINEUP NOTES: Magic coach Scott Skiles said he toyed with the idea of starting Hezonja at small forward against the Wizards. The fifth overall pick in the draft, Hezonja made only one preseason start, but showed the scoring versatility he was known for in Europe. "The thing we're trying to weigh with him is we want him to feel comfortable," Skiles said. "I don't want to call it jitters because he's really confident. There's just a little uncertainly out there. (Starting) is certainly something we're going to continue to look at, for sure."

NEW SHOT: Orlando's Elfrid Payton was at times a liability on offence last season, and devoted a good portion of the off-season trying to develop and outside jumper. It paid off against the Wizards, with the second-year point guard knocking down three jumpers in the first half.

UP NEXT: Orlando hosts Oklahoma City on Friday. The Wizards visit Milwaukee on Friday.