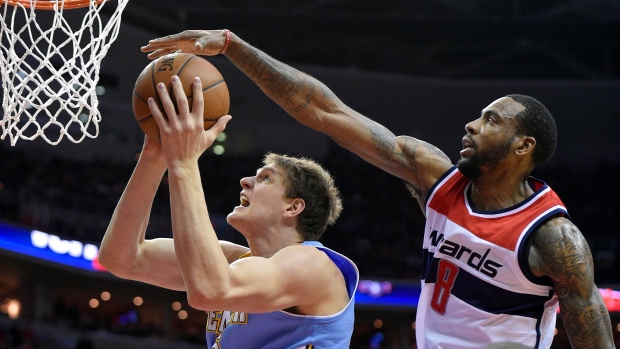 WASHINGTON - Kris Humphries scored 20 points, Rasual Butler and Kevin Seraphin each had 16 as the Washington Wizards scored their biggest win of the season, beating the Denver Nuggets 119-89 on Friday night.

Washington won its fourth straight improving to 13-5. They set a season high in points.

Wilson Chandler, who scored 10 straight Denver points in a two-minute span in the third quarter, led the Nuggets with 20 points. Denver dropped to 9-10. Their 89 points equaled a season low.

The Wizards outscored the Nuggets 35-18 in the second quarter to take a 65-46 lead at halftime. The 65 points were the most Washington scored in a half this season. They led by 21 in the third, and by 34 late in the fourth quarter.

WIZARDS: F Nene returned after missing five games due to plantar fasciitis in his right foot. He didn't start, but scored eight points and had eight rebounds in 17 minutes. . F/G Martell Webster, who hasn't played this season due to June back surgery, is making progress according to coach Randy Wittman. "He's starting to do more and more each day," Wittman said. "Not a whole lot of contact, a little bit." Wittman declined to guess when Webster will be ready to play.

Nuggets: At Atlanta on Sunday

Wizards: At Boston on Sunday