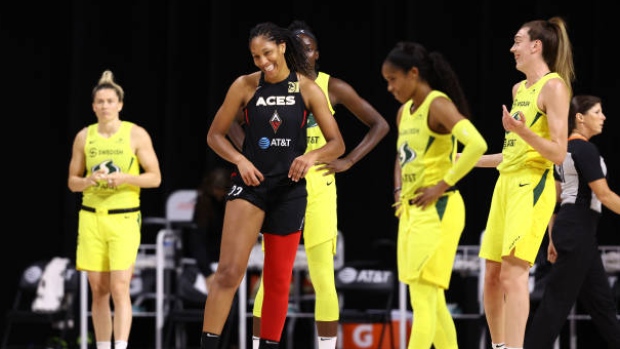 It seems fitting that the two best teams in the regular season, the Las Vegas Aces and the Seattle Storm, will be the ones to duke it out in the WNBA Finals.

The Aces finished as the No. 1 seed after edging out the Storm, who held that top spot for most of the year, on the last day of the regular season.

Watch Game 1 of the WNBA Finals Friday night between the Las Vegas Aces and the Seattle Storm LIVE at 7 p.m. EST/4 p.m. PST on TSN1/4/5 and streaming on TSN.ca, the TSN App and TSN Direct.

Las Vegas is coming off a tough series against the Connecticut Sun, which included being down 2-1 and battling back from a 16-point deficit in the all-deciding Game 5 before securing the 66-63 win.

The Storm come into the Finals fresh off a sweep of the Minnesota Lynx. After a buzzer-beater win in Game 1 to edge the Lynx, the Storm took it up a notch after that, completing the sweep with a dominant 92-71 win in Game 3.

This series pits two of the best players in the league this season against each other in the Aces’ A’ja Wilson and the Storm’s Breanna Stewart.

Wilson edged out Stewart for WNBA MVP this year and she has kept it up in the playoffs for Las Vegas, averaging 21.8 points per game, 10.4 rebounds per game and 3.0 assists per game. She was the difference-maker in Game 5 against the Sun, with a game-high 23 points, 11 rebounds and four assists.

Not to be outdone, Stewart has averaged 23 PPG, 8.0 RPG and 5.7 APG in the playoffs so far. Her best performance of the post-season came in Game 3 with a playoff career-high 31 points, six rebounds and seven assists for the Seattle.

Angel McCoughtry has been the second-leading scorer in the playoffs for the Aces, averaging 16 PPG, 4.4 RPG and 3.6 APG. The 34-year-old is searching for her first WNBA championship, having lost in the Finals three times as a member of the Atlanta Dream.

For Seattle, Jewell Loyd was the star in Game 1 with 25 points and went 4 for 5 beyond the arc. She followed that up with 20 points, six rebounds and four assists in Game 2. Loyd is the second-leading scorer for the Storm behind Stewart, with 17.3 PPG.

Alysha Clark, who was named to the All-Defensive First Team as a unanimous selection, had the buzzer-beater in Game 1 of the semifinals against the Lynx with 12 points and six rebounds. Sue Bird had her best game of the playoffs with 16 points and nine assists in Game 3, while averaging 11.3 PPG and 7.3 APG in the playoffs.

Both teams will be missing a key reserve player in the Finals. Dearica Hamby, the WNBA’s Sixth Woman of the Year winner, is out for the Aces with a knee injury while the Storm’s Sami Whitcomb is out for personal reasons.

The Aces beat the Storm in both regular season meetings but Bird didn’t appear in either game for Seattle with Stewart missing the second game. The Storm are more experienced when it comes to championship runs, as they return virtually the same team that won the title in 2018. Las Vegas showed their mettle by facing adversity in the semifinals against the Sun and prevailing in the end.

Either team has a legitimate case to be the one to take home the trophy. As good as Las Vegas is, Seattle has the edge here with how well they played in their sweep of the Lynx and the amount of championship experience they possess on their roster.