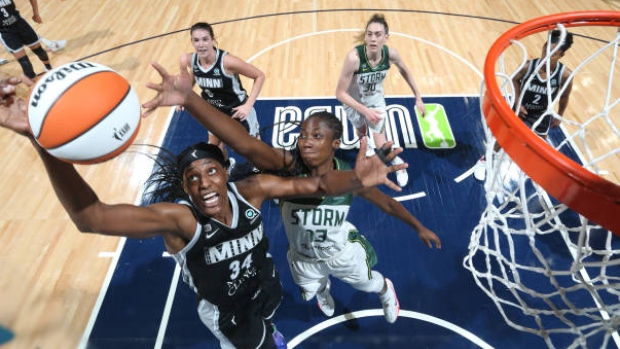 With the last day of the WNBA regular season fast approaching, the playoff race is as tight as ever. With all 12 teams jockeying for spots in the standings, determining the eight teams that will advance to the postseason promises to be a furious fight to the finish.

The Sun had a lull in June without centre Jonquel Jones, a leading candidate for MVP, in the lineup but Connecticut found their stride once she returned, and have ripped off six consecutive wins.

Before last night's game, the Las Vegas Aces were averaging 90.5 points per game.

The Connecticut Sun held them to 62.

They've been holding opponents to 71.5 points overall for the season — best in the WNBA.

The Aces have arguably the deepest team in the league, led by reigning MVP A’ja Wilson. Joined by fellow Olympic gold medallists Chelsea Gray, Kelsey Plum, and Jackie Young as well as Liz Cambage and Dearica Hamby, Las Vegas was swept in the finals last season by Seattle but have the team to win it all.

Which brings us to the reigning champion Storm. With Breanna Stewart turning in another MVP-calibre season, Jewell Loyd having a career year and the continued strong play of Sue Bird, Seattle is a team that can turn on the high-octane offence at will. Despite losing several key pieces in the off-season, it’s the continued development of players like Mercedes Russell, Ezi Magbegor and Katie Lou Samuelson that has helped keep Seattle near the top.

Tier 2 – Middle of the pack

The next tier of teams pushing up the standings are the Minnesota Lynx, Phoenix Mercury, and Chicago Sky. All three teams have rosters that can contend and push their way into the top three but have had their struggles at times putting it all together.

The Lynx were a team that struggled mightily early on. Turnovers and defensive inconsistency were big problems and while they still creep up at times, Minnesota has rebounded nicely to be a top-four team. Fowles continues to lead the way but the addition of Layshia Clarendon in May has been massive, with their playmaking and ability to play in all situations a calming influence on a team that desperately needed it.

Fowles made history tonight by becoming the FIRST player in #WNBA history to record at least 20 points, 20 rebounds, 3 steals, and 3 blocks in a game 👏👏#CountIt pic.twitter.com/xmedyt59Bu

The Mercury boast one of the best trios in the league in Diana Taurasi, Brittney Griner and Skylar Diggins-Smith. Griner has been a force this season on both ends of the floor with 20.5 PPG and a career high 9.8 RPG as teams struggle with how to defend the 6-foot-9 centre.

For the Chicago Sky, much of their success has hinged on whether Candace Parker is healthy and in the lineup. With Parker, the Sky are 11-4. Without her, they are a dreadful 1-8. Parker signed with her hometown team during the off-season, in hopes she would be the piece to get the Sky over the hump. Parker has delivered when healthy but without her, the Sky haven’t been able to win.

Four teams fall into this category. Currently 7-10 in the standings, the New York Liberty, Los Angeles Sparks, Dallas Wings and Washington Mystics are all vying for those final playoff spots.

The New York Liberty have rebounded nicely this season after a year where they went 2-20. Signing Betnijah Laney, who has easily been New York’s best player, was New York’s strongest off-season move. With 17.8 PPG, 4.1 RPG and 5.2 APG, Laney has continued to build on last year, when she took home Most Improved Player. However, the Liberty were dealt a blow this week with Sami Whitcomb out 10-14 days with an ankle injury.

One team that has worked their way back into the picture this season is the Los Angeles Sparks. With Nneka Ogwumike now healthy, it’s no coincidence the Sparks won four straight with her back on the court.

In Dallas, Arike Ogunbowale has had another strong season, averaging 18.6 PPG, 3.2 RPG and 3.4 APG, while Marina Mabrey is a contender for Most Improved Player with career highs in 13.4 PPG, 4.3 RPG and 2.8 APG. The Wings are pushing for their first playoff appearance since 2018.

everyone should be terrified https://t.co/a7Dep3Hcqe

However, it’s the Mystics who have brought in the best addition they could’ve asked for. After nearly two full years of not playing between sitting out last season and two back surgeries, Elena Delle Donne made her return on Sunday. She had 16 points and 3.0 rebounds in her first game and followed that up with 18 in her second. Despite Tina Charles putting up an MVP-calibre season, injuries have held the Mystics back is injuries. A healthy Delle Donne could push Washington into a playoff spot.

Tier 4 – Out of the picture

The Dream had a chance at a playoff spot but after nine consecutive losses, they have faded from the picture. Atlanta has had a tumultuous season, with the GM being fired in April and have had three different head coaches. Rising star Chennedy Carter was suspended in early July for “conduct detrimental to the team.”

The Fever have languished at the bottom of the standings for most of the season. At 5-18, they showed signs of growth prior to the Olympic break but as a team fully in rebuild mode, playoffs are not in the cards this year.

Kia Nurse (Phoenix Mercury) – Coming off the Olympics, Nurse has struggled to hit the scoresheet for the Mercury, with her best performance coming against the Fever with five points and three assists. However, the Mercury have won four straight coming out of the break and she has started all 23 games this season.

Bridget Carleton (Minnesota Lynx) – Carleton’s best performance this past week came in a loss to the Sun. With six points, four rebounds and three assists in 25 minutes, Carleton has continued to give the Lynx valuable minutes off the bench and has earned praise from head coach Cheryl Reeve.

Cheryl Reeve on Bridget Carlton: "Her minutes were huge for us. She fought in the post...Bridget does everything you ask of her. She's a player who does things right, she sensed we needed perimeter shooting, she did it." #CantTameUs

Natalie Achonwa (Minnesota Lynx) – Back after missing several weeks prior to the Olympic with a right knee injury, Achonwa had eight points against the Liberty but has struggled to get playing time the past three games. It has been the epitome of her season, as she struggles to get playing time and the offence hasn’t come quite as easily.