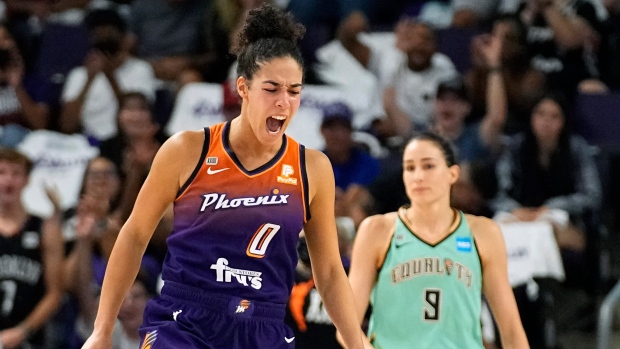 The excitement level of the WNBA playoffs was cranked up a notch in the second round.

The Phoenix Mercury's 85-80 overtime win over the reigning champion Seattle Storm was high octane from start to finish, and more importantly, it was potentially the last time legends Sue Bird and Diana Taurasi shared a court as they inch towards the end of their storied careers.

Canadian Kia Nurse had 12 points in the Mercury’s victory as her first WNBA playoff run continues.

The second game delivered the biggest upset of the playoffs so far. With an 89-76 victory, the sixth-seeded Chicago Sky took down the No. 3 Minnesota Lynx, ending the playoffs for Canadians Natalie Achonwa and Bridget Carleton.

The Sky put up a big performance against the favoured Lynx, neutralizing Minnesota’s best players with aggression. Courtney Vandersloot had 19 points and five assists while Kahleah Copper had 16 points and 10 rebounds.

The postseason now shifts to a best-of-five format with the No. 1 Connecticut Sun taking on the Sky while the No. 2 Las Vegas Aces draw the Mercury.

The Connecticut Sun have been rolling all season long and come into the semifinals having won 14 consecutive games after a regular season where they went 26-6.

Leading MVP candidate Jonquel Jones took her play to new heights this season. Averaging 19.4 points, 11.2 rebounds and 2.8 assists, Jones’ rare blend of size and skill powered the Sun all season. It’s no coincidence that the Sun’s only lull this season came when Jones was out of the lineup due to national team commitments in June.

Along with Dallas guard Marina Mabrey, Brionna Jones is a leading contender for Most Improved Player of the year. Offensively, Jones set career-highs across the board in points (14.7), rebounds (7.3) and assists (1.8).

DeWanna Bonner, a veteran of 12 WNBA seasons, also turned in another strong year with 15.2 points, 6.4 rebounds and 3.4 assists.

For the first time in league history, the Sun had four players named to the WNBA’s All Defensive Teams. Jonquel Jones and Briann January made the first team, while Brionna Jones and Jasmine Thomas were named to the Second Team.

And as if the Sun couldn’t possibly get any better, they welcomed back Alyssa Thomas, who was initially projected out for the season recovering from a torn Achilles.

In the bubble last season, Thomas nearly willed the Sun past the Aces in the semifinals despite playing with two injured shoulders. While she continues to work her way back and in a slightly different role, having her available bolsters the Sun’s chances even further.

For Chicago, Copper has come up big in both playoff games while Vandersloot continues to show why she is one of the best point guards in the game.

Candace Parker came into the season with big expectations of turning the Sky into a contender, and so far, she has delivered. Parker’s leadership has made a difference for this team and is a big reason why Chicago finds themselves in the semifinals.

The Sky went 2-1 against the Sun in the regular season, however both victories were without Jonquel Jones in the lineup for Connecticut. Chicago is proving that when they are on their game, they are a tough out. However, there is a reason why the Sun are the current playoff favourite and Chicago’s play so far doesn’t change that.

The Aces were swept in the finals last year by the Seattle Storm and they’ve positioned themselves as a contender again.

Kelsey Plum, in her first season back from Achilles’ surgery, is the favourite for the Sixth Woman of the Year. Her 14.8 PPG was second only to Wilson on the Aces.

After sitting out the 2020 bubble season with a medical exemption, the Aces welcomed back centre Liz Cambage this season and she didn’t miss a beat, averaging 14.2 points and 8.2 rebounds.

Jackie Young is another player that took another big step forward this season, starting every game for the Aces with a career-high 12.2 PPG.

The Mercury leaned heavily on their 'Big Three' to get past the Storm and they delivered. Brittney Griner had 23 points, 16 rebounds and four assists. Skylar Diggins-Smith scored 20 with seven rebounds and six assists while Taurasi, in her first game back since Sept. 6, had 14 points with four rebounds and five assists.

However, the health of Taurasi will continue to be a storyline heading into the semifinals. It was clear her ankle injury was an issue in the second round against Seattle as she was seen limping and grimacing in pain at various times throughout the game.

A key matchup in this series will be between Griner and Cambage in the paint. So far, Griner has not matched up with another big centre in the playoffs and has been heavily double-teamed by the opposition. Facing another big will be a different challenge for Griner.

Las Vegas went 2-1 against the Mercury this season. Phoenix does not have the depth Las Vegas boasts but their 'Big Three' can take over and go toe-to-toe with anyone. The Aces are the favoured team in this matchup, but the Mercury will not go down without a fight.