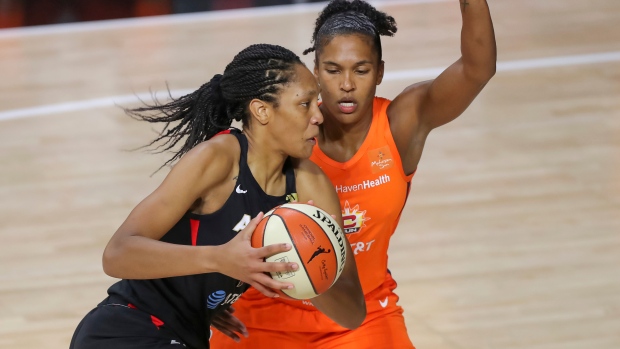 The WNBA playoffs continued to deliver the highlights in the second round.

The No. 4 seed Minnesota Lynx edged the No. 5 Phoenix Mercury by a single point in an 80-79 victory. Damiris Dantas was the catalyst for the Lynx, recording 22 points and eight rebounds.

In the second game, the No. 7 Connecticut Sun handily took down the favoured No. 3 seed Los Angeles Sparks 73-59 with DeWanna Bonner (17 points, 13 rebounds) and Alyssa Thomas (19 points, seven rebounds) leading the way once again.

Watch Game 1 of the semifinals Sunday between the Las Vegas Aces and the Connecticut Sun LIVE at 1 p.m. EST/10 a.m. PST on TSN2 and streaming on TSN.ca, the TSN App and TSN Direct.

The Sun draw the No. 1 seed Las Vegas Aces while the Lynx will contend with the No. 2 Seattle Storm.

The semifinals will have the teams competing in a best-of-five series with the winners moving on to the WNBA Finals.

The Aces earned the top seed on the last day of the regular season when they downed the Storm 86-84.

Fresh off winning her first WNBA MVP title on Thursday, A’ja Wilson enters the series having been dominant all season long for Las Vegas, finishing the year with 20.5 points per game, 8.5 rebounds per game and 2.0 assists per game.

After starting the season 0-5, the Sun bounced back big time and have thrived so far in the playoffs, as demonstrated by beating both the No. 6 Chicago Sky and the Sparks by 13 and 14 points respectively. Bonner and Thomas lead the way every night for them but Brionna Jones, Briann January and Jasmine Thomas have also contributed on the scoresheet so far in the playoffs while playing important minutes.

Both teams excelled defensively in the regular season as the Aces were second in the league in defensive rating at 97.2 while the Sun came in fourth in this category at 99.5. Las Vegas has the clear edge offensively with a 107.3 offensive rating to Connecticut’s 100.1.

Las Vegas won both meetings against Connecticut this season. They will look to improve on last year’s playoff performance, where they lost in four games in the semis to the eventual champion Washington Mystics. The Sun continue to be the underdog here as the Finals runner-ups from last year look to make it back to the championship series. The Aces are the favourite here but the Sun will not be a pushover.

Despite losing the top seed to the Aces, the Storm can arguably still be considered favourites to win the whole thing. MVP runner-up Breanna Stewart had a big season coming back from an Achilles injury, posting 19.7 PPG, 8.3 RPG and 3.6 APG.

The Storm also have Jewell Loyd, Alysha Clark, Natasha Howard, Jordin Canada and Sue Bird. In the case of Bird, she played only 11 games this season but the Storm are better when she is on the floor. If she and Stewart, who was also injured at the end of the regular season, are healthy and ready to go, the Storm are even more formidable.

For the Lynx, they are coming off a big win after edging the Mercury by a single point. Dantas was the star of the game, but she got help from the likes of WNBA Rookie of the Year Crystal Dangerfield (17 points), Rachel Banham (11 points) and Odyssey Sims (14 points). Dangerfield in particular struggled in the first half of her WNBA playoff debut but stepped it up in the second half.

Sylvia Fowles also made her return to the Lynx lineup for the first time in weeks since injuring her calf. She had six points and four rebounds but the rust showed after not playing for a long time. Napheesa Collier also struggled to get touches against the Mercury, registering just seven points on the night and was just 2-for-6 from the field. Getting her more involved in the offence will help Minnesota’s chances.

The Storm finished the regular season as the top team in defensive rating at 93.3 while the Lynx came in fifth at 101.7. Offensively, Seattle is the better team with an offensive rating of 108.3 but Minnesota isn’t far behind at 106.7. Both squads have players who can be difference-makers in crunch time.

Seattle beat Minnesota in both regular-season meetings by significant margins (90-66 and 103-88). Minnesota could make this a very close series if their young stars continue to take it up a notch but much like the Aces in their matchup against the Sun, the Storm are the favoured team with their depth and experience.