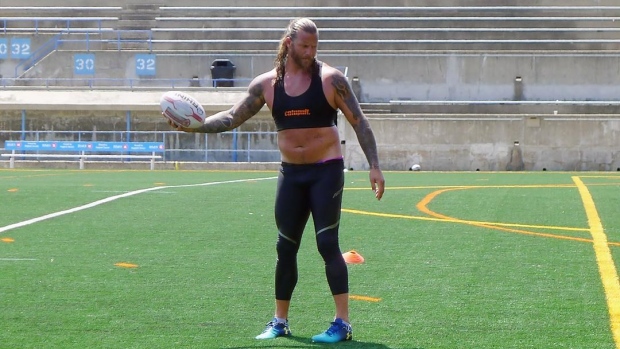 TORONTO — After 17 years of being a rugby league hammer to his opponents' nail, Toronto Wolfpack forward Ashton Sims has announced plans to retire at the end of the season.

The 34-year-old Australian, a pony-tailed man-mountain at six foot four and 245 pounds, has made his living by running at — or over — opponents. Or smashing them to the ground in a gang-tackle.

"Humbled, undeserving and grateful are words that come to mind when I reflect on 17 years of professional rugby league," Sims wrote in a social media posting announcing his retirement plans.

"If I've inspired just one kid to play rugby league, I'm a happy man," he added.

He joined the transatlantic Wolfpack for the 2018 season from England's Warrington Wolves. He came to England in 2015 after stints in Australia with St. George Illawarra Dragons, Brisbane Broncos and North Queensland Cowboys in the National Rugby League.

Sims says he made the decision to retire the last few weeks after talking with his wife, saying it's the right time to look forward to the next chapter of his life. He wants to remain in sports, with an eye to getting involved with the business and management administration side.

Sims, who has four kids, comes from a rugby league family.

Thanks to mother Jacqueline's heritage, Ashton, Korbin and Tariq have all represented Fiji at the Rugby League World Cup.

The family grew up in Gerringong, some 140 kilometres down the coast south of Sydney, where father Peter is a dairy farmer.

The offer to come to Canada came out of left field after appearing in a Challenge Cup game with Warrington. Brian Noble, a rugby league icon who is Toronto's director of rugby, approached him in the parking lot and planted the idea.

After thinking it over, he decided he couldn't turn down the chance to help grow the sport in North America.

While a country boy at heart, Sims says he fell in love with Toronto after exploring the city on his bike.

"You guys don't realize how lucky you've got it here,'' he said in a July 2018 interview. "I mean I haven't seen it in the winter. I hear winter's pretty harsh. But it's just such a great city. It's easy to get around ... And the people are great.

"And that's a pretty big compliment coming from a guy like myself who doesn't really like cities. I don't really like hustle and bustle but this (city) definitely holds a nice spot in my heart.''

Sims will look to end his playing career by helping Toronto earn promotion to the Super League. The Wolfpack (22-1-0) currently top the second-tier Betfred Championship and are riding a 17-game winning streak ahead of Saturday's visit by the second-place York City Knights (16-6-1).

Despite the toll of rough-and-tumble rugby league, Sims says he feels pretty good.

"I never took it for granted once," he said of his career. "I trained hard, looked after myself. I loved doing rehab and recovery stuff to try and gain an edge on my opposition. That's something I've always done. I've always believed you have to make your own luck."