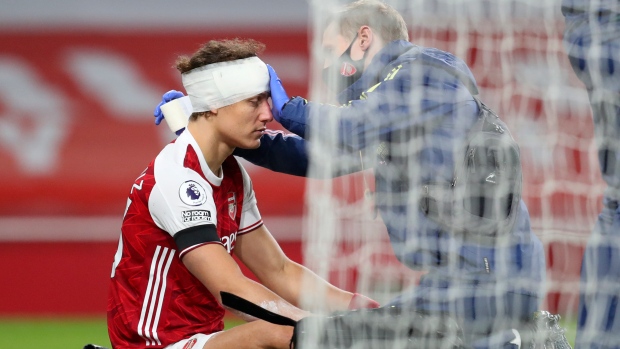 LONDON — Wolverhampton beat Arsenal in an away match for the first time in more than four decades, winning 2-1 on Sunday in the Premier League in a game overshadowed by a serious head injury to Wolves forward Raul Jimenez.

The 29-year-old Jimenez was taken away on a stretcher in the fifth minute and then to a hospital, after a collision with Arsenal defender David Luiz while both challenged for a corner from Willian.

Jimenez, a Mexico international, is conscious and talking, Wolves manager Nuno Espirito Santo said. He will undergo a scan.

“He speaks, he’s aware. He’s doing a scan," the manager said, adding that the team was still worried about Jimenez's situation. "Now we (will) have a proper assessment. But he’s in good hands.”

Arsenal manager Mikel Arteta said Luiz never lost consciousness and went through all the necessary medical tests when a head injury occurs. Arteta said Luiz was substituted before the start of the second half because the defender had a nasty cut and wasn't comfortable heading the ball.

Arteta sent his “best wishes and love” to Jimenez.

“Hopefully it’s not as bad as it looks," he said.

While Wolves players were visibly upset by the incident, they went on to take control of the match.

Wolves opened the scoring in the 27th when Pedro Neto slotted in a rebound after Leander Dendoncker's header crashed off the crossbar and fell to Neto in the six-yard box. Adama Traore created the chance, beating Kieran Tierney with a run down the right before the winger lifted the ball into a dangerous area.

Gabriel equalized for Arsenal three minutes later with a towering header as four defenders, including one pulling his shirt couldn't stop the Brazilian from scoring.

Wolves made it 2-1 in the 42nd when Daniel Podence took advantage of the rebound after goalkeeper Bernd Leno couldn't collect Neto's shot, which bounced off his legs for Podence to volley home. Neto's run through Arsenal's shaky defence created panic in the penalty box and allowed Podence to drift in to pounce on the loose ball.

Traore nearly made it 3-1 in the fifth minute of injury time of the first half after cutting in from the right, but his shot crashed into the side netting. Willian nearly equalized for Arsenal with a free kick in the 57th, but it rose just over the bar. Rob Holding also had an open header but couldn't connect with a Saka cross.

It was the first away win for Wolves against Arsenal since 1979, bringing the team up to sixth in the Premier League.

“We did what Raul would have wanted: for us to focus on the match,” Neto said. “We had to win the game for him and dedicate the victory to him.”

Espirito Santo said he was pleased with his team’s performance, considering the shock of Jimenez’s injury.

“I’m very proud,” he said. “This team showed heart today. A will, a belief. The way they run, they way they work.”

“We didn’t have enough shots,” Arteta said. “There are no excuses. We have to improve.”