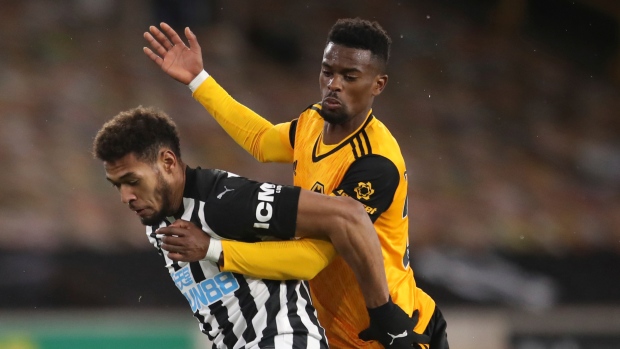 WOLVERHAMPTON, England — Wolverhampton and Newcastle drew 1-1 for the fourth straight meeting in the Premier League after two late goals at Molineux on Sunday.

Raúl Jiménez scored with a dipping shot from the edge of the area in the 80th minute for what seemed like a match-winning strike by the Mexico striker for Wolves for the second time in a week.

However, with only its second shot on target all match, Newcastle equalized in the 89th when Jacob Murphy curled a low free kick around the defensive wall and inside the near post, with Rui Patricio only able to get a weak hand on the shot.

Eight of the 11 Premier League matches between Wolves and Newcastle have now ended in a draw, with seven of them — including the last four — finishing 1-1.

Jiménez has scored four of Wolves’ six goals in the league so far — he scored 17 in total last season — and again provided the cutting edge on a day his team was frustrated by Newcastle's defensive tactics.

While there was an element of fortune to Jiménez's deflected winning goal against Leeds on Monday, there was no luck involved six days on as he controlled a clearing header from a corner and drove a fierce effort past goalkeeper Karl Darlow, who got a touch but couldn't keep the ball out.

Jiménez had backtracked to the edge of the area as the free kick came over instead of attempting to compete for the ball in the air, in the hope it would be cleared to where he was standing.

Patricio will be disappointed with the equalizer, which caught him out at the near post after setting his wall up. It was, though, a precise effort from Murphy that was at odds with Newcastle's attacking play up to that point.