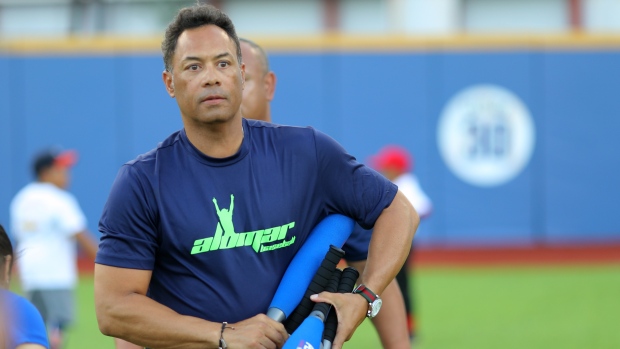 A woman is speaking out about alleged sexual misconduct by former Toronto Blue Jays star Roberto Alomar and says she's hopeful her story can help others.

Melissa Verge wrote a first-person essay for the Toronto Star last week, alleging that Alomar pressed his body against hers without consent and propositioned her for sex when she was an 18-year-old volunteer at a Blue Jays kids camp in 2014.

"I'm glad I told the story. I don't regret it," Verge, now 25, said in an interview with The Canadian Press. "I think that’s one of the ways change is going to happen, if people speak up."

The allegations have not been proven.

Alomar's lawyer, Carita Wong, said in a statement that Alomar "intends to address these allegations in the appropriate forum through the proper channels, and will not engage in a trial by media."

The Hall of Fame second baseman was fired from his role as a Major League Baseball consultant on April 30 and placed on the league's ineligible list following an external investigation into a separate allegation of sexual misconduct.

Commissioner Rob Manfred said in a statement that a baseball industry employee earlier this year reported an incident involving Alomar from 2014. The league did not provide details of the allegations in order to protect the identity of that individual involved in a separate alleged incident.

After that announcement, Alomar posted a statement on Twitter saying he was "disappointed, surprised and upset'' with the news.

"With the current social climate, I understand why Major League Baseball has taken the position they have,'' he said. "My hope is that this allegation can be heard in a venue that will allow me to address the accusation directly."

The Blue Jays severed ties with Alomar in April, ending his position as special assistant to the team, removing him from their Level of Excellence and taking down his banner from Rogers Centre.

Verge was at a friend's house when the news about Alomar being fired popped up on her phone.

"I was just like, 'Wow. Finally this is happening.' I wasn’t surprised because I’d had the bad experience before," she said. "I guess there was kind of a sense of relief or justice, like, 'Finally, this is what needs to happen.'"

Verge grew up loving baseball. Her childhood bedroom in Titusville, N.B., was plastered in newspaper clippings about the Blue Jays and in high school, she found confidence on the field.

When she moved to Toronto to go to Ryerson University, Verge jumped at the chance to help out with a Jays kids camp. She believed the experience would provide connections that could ultimately help her land a dream job with the team.

Verge had attended similar Jays camps as a young athlete and even volunteered at one in New Brunswick. At the camps, she'd met some of the team's former players, including Alomar, who played second base for Toronto from 1991 to 1995 and had a major role in the Blue Jays' back-to-back World Series titles in 1992 and '93.

She was thrilled when, on the first day of camp, he offered to give her a private tour of Rogers Centre.

"I looked up to him," Verge said. "I was super excited and I guess honoured that he wanted to show me around."

Verge said they were in the weight room when Alomar approached her from behind.

"He was just rubbing against me from behind," she said.

"I could feel him against me and I could kind of hear him breathing. Physically, I didn't want to be there at all. I just wanted to leave and go back out to the camp."

Verge said she doesn't remember how long the contact lasted, but she moved to leave and said as they returned to the field, Alomar put his arm around her in an uncomfortably tight embrace.

She said he also gave her a piece of paper with his phone number on it and asked her what she liked to drink, listing various types of alcohol.

Verge said she no longer has the piece of paper.

Verge said she was shocked by what had happened, and told her then-boyfriend about Alomar's conduct when she got home.

The Canadian Press was unable to reach the former boyfriend to confirm.

Despite the alleged incident, Verge decided to return for the second day of the three-day camp.

"I still wanted to work for the organization. I wanted every chance I could get to make connections so I thought I would go back," Verge said.

On the second day of the camp, Alomar approached Verge during a break.

"He said when everything was done, we could go up to his suite," she said. "I felt scared because I didn’t want to go with him at all."

Verge said she didn't know how to respond because there was a power imbalance between them.

Jack is listed as the president of Alomar Sports Inc. on LinkedIn. He declined comment to The Canadian Press, referring all questions to Wong.

When asked about Jack, Wong said "We have nothing to add to the statement I provided you previously."

Verge said Alomar told her that he saw her as a sister, a comment she found confusing.

"First of all, we barely knew each other. We'd interacted maybe a few times so it seemed inaccurate to say he saw me as a sister," she said. "And also, it was not the way you would treat your sister.

"It didn’t seem like an authentic apology … What he was saying didn’t make any sense."

The Blue Jays declined comment to The Canadian Press this week, but told the Star they had launched an internal investigation using an outside firm.

Nearly seven years after her interaction with Alomar, Verge said the experience still has lasting impacts on her life.

"It definitely took away a lot of my innocence and naivete," said Verge, who currently works in communications in Toronto.

"Even now, I feel like often I'll question people’s intentions and if they’re really nice to me, I'll wonder if there’s an ulterior motive, especially older men."

Verge said she shared her experience with a professor at Ryerson in the fall of 2014 because the first-year journalism student wanted to write about what had happened and was looking for advice. Verge ultimately decided not to publish her story over concerns about legal action.

The professor, Lisa Taylor, confirmed with The Canadian Press that Verge discussed writing about the alleged incident using emails from 2014.

Verge decided to share her story publicly after hearing about the separate MLB investigation that resulted in Alomar being fired.

Verge said she's thankful to the individual in that investigation — who remains anonymous — for speaking up.

Verge still dreams of working in baseball one day, particularly in amateur baseball where she could help emerging athletes.

Sharing her story hasn't been easy, but Verge said she's received a lot of support from her fiancée, parents and friends, along with strangers online.