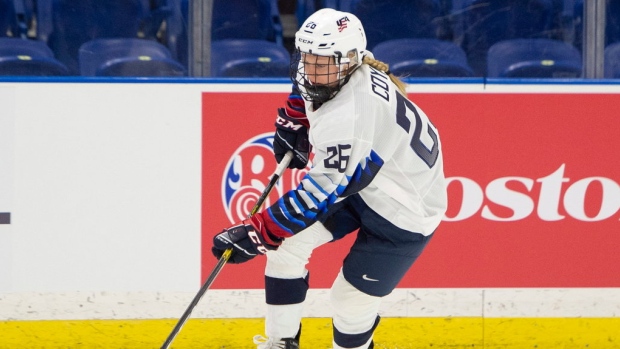 CALGARY — The puck drops Friday on a women's world hockey championship 859 days after the last one.

Who's counting? American forward Kendall Coyne Schofield is, for one.

"The pinnacle of women's hockey hasn't been showcased in 859 days," Coyne Schofield told The Canadian Press. "That's why it's important that we're here."

Ten countries will compete in summer for a world title in Calgary with the 2022 Winter Olympics in Beijing less than six months away.

The COVID-19 pandemic forced the cancellation of the 2020 world championship in Halifax and Truro, N.S.

Those communities were awarded the championship again in 2021 when it was postponed from April to May.

Iain Rankin, who was Nova Scotia's premier then, pulled the plug on the tournament the same day international teams were departing for Canada.

The women's under-18 championship in Sweden was also cancelled, creating an international hockey gender gap that Hockey Canada was behooved to close.

The Markin MacPhail Centre, which served as a domestic and international curling bubble venue from February to May, features an ice surface of international dimensions with seating for 3,000.

Tickets aren't available for the preliminary round, but Hockey Canada hasn't ruled out spectators for the medal round as it continues to work with public health authorities.

Canada downed Finland 4-1 in Wednesday's exhibition game ahead of facing the Finns again in Friday's tournament-opener.

"We're getting used to, on the team, just adapting to whatever comes at us," Canadian forward Brianne Jenner said.

"I know it sounds like that cookie-cutter answer, but we're honestly just so excited to compete."

Rosters are expanded to 25 players from 23 for this tournament because no late additions are permitted in the event of injuries.

Similar to the junior men's championship in Edmonton, players and other personnel travelling to Canada isolated at home or in a team bubble, and were tested regularly, for seven days before arriving on charter flights

No player or official had tested positive for the coronavirus as of Tuesday, according to the International Ice Hockey Federation.

The 2019 women's championship in Espoo, Finland, now feels long ago for veteran players, despite its drama.

On the eve of that championship, those who played in the Canadian Women's Hockey League were informed it was about to fold.

Bronze medallist Canada lost a semifinal to the host Finns and didn't play for gold for the first time in the 29-year history of the tournament.

The U.S. beat Finland in a shootout for gold and a fifth straight world title. Sweden, the 2006 Olympic silver medallist, was beaten by Japan and relegated.

"It feels like a lifetime ago," Jenner said. "Anything pre-pandemic does feel like a different world, a different reality."

The United States, Finland, Canada, Russia and Switzerland comprise Pool A in Calgary. The Czech Republic, Japan, Germany and promoted Hungary and Denmark are in Pool B.

TSN will carry all games via its main network, regional networks or live streaming.

Russia continues to be designated "ROC" in IIHF tournaments, without the country's flag displayed or anthem played, because of World Anti-Doping Agency sanctions against the country.

The five Pool A countries as well as Japan and host China have berths in Beijing's Olympic field. The three remaining slots are still to be filled via November qualifying tournaments.

So while medals and world rankings are at stake in Calgary, a world championship at a strange time in the calendar provides a Beijing benchmark for teams that had little international competition over the last two years.

This report by The Canadian Press was first published Aug. 18, 2021.