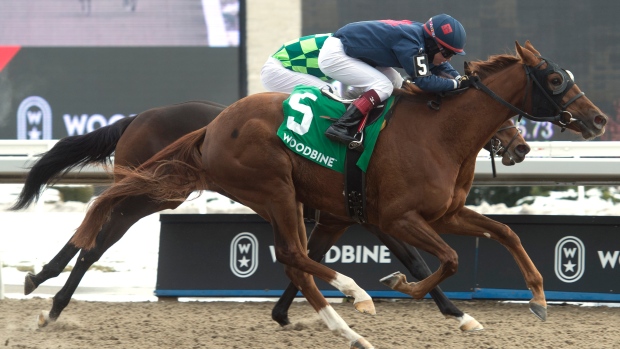 TORONTO — It's been a meteoric rise for jockey Kazushi Kimura.

The laurels have been steady for the 20-year-old since 2018 when he left his native Japan to ride at Toronto's Woodbine Racetrack. He was named Canada's top apprentice jockey following his first season, then in January received an Eclipse award as North America's outstanding apprentice rider.

That made Kimura the first Woodbine-based jockey to win the award since Omar Moreno in 2010.

Such a decorated start will certainly increase the weight of expectation on Kimura's shoulders in 2020. But it pales in comparison to what the soft-spoken jockey expects from himself.

"I'm looking to be (a) championship rider," he said in a telephone interview. "Every single race I want to win.

"I had wins (last year) but I also had many seconds and I don't like that. I just want to win, I'm just a competitive guy."

Kimura's career highlight, though, was guiding Magnetic Charm to a second-place finish behind Starship Jubilee in the Grade II $300,000 Canadian Stakes turf event at Woodbine last September. The British-bred filly is owned by Queen Elizabeth II.

"I rode for the Queen," Kimura said, the excitement clearly evident in his voice. "That was a wonderful experience and opportunity.

Jordan Miller, Kimura's agent, doesn't expect his client to get more rides in 2020 as a result of capturing the Eclipse award. But he feels both the quality of races and mounts should improve.

"To be honest there really isn't room for many more rides in terms of quantity because he's already riding eight, nine times a day," Miller said. "The only difference coming up is going to be the quality of rides.

"With Eurico retiring that leaves a void and the top riders are going to be the ones who fill that void. I don't see (Kimura) riding more but he will be riding better horses."

And that would suit Kimura just fine.

"I like to try to win the Oaks and Queen's Plate this year," he said. "But it (Woodbine) is such a beautiful track with many many good riders so you never know.

"Someone could do well and riders could come from the (U.S.). I will stay hungry and be strong."

Kimura grew up around horses as his father runs a thoroughbred training centre in Hokkaido, Japan. He left home at age 14 to attend the Japan Racing School in Shiroi City, Chiba Prefecture, and remained there for two-and-a-half years.

Despite his early success in Canada, Kimura admits adjusting to a new country, language and surroundings hasn't been easy. When not at Woodbine, Kimura can be found reading or studying in a library.

"Difficult, so difficult," he said. "When I came to Canada I couldn't speak English, that's why I tried talking, reading books and learning.

"I've just needed more practice speaking. My agent is Canadian and speaking (to him) every single day, that's helped me learn more quickly."

"His dedication is uncanny, to be honest," he said. "When I first met him in April 2018, he didn't speak a lick of English, we communicated through Google translate.

But Miller said Kimura's drive is but one reason for his success.

"I tell people, 'He's special,' and they ask, 'How?'" Miller said. "There's three things in a jockey that you need and you never get all three.

"You never get a rider who's naturally light, has natural talent and is dedicated. But with Kazushi, all he cares about is horse racing. He goes home and studies it, watches replays, he goes to the gym. All he cares about is being the best and luckily he has all the traits to be the best."

Kimura is currently riding at Gulfstream Park in Florida. But he can't wait to return to Woodbine in April when the track's race schedule begins.

"Gulfstream has many good riders and trainers and is a really good opportunity," he said. "I need more experience from other racetracks, that's why I came to Gulfstream.

"I'm so happy about (the last) two years but I feel it's not enough yet. I'm looking forward to going back to Woodbine and trying to be (the) leading rider because Eurico retired. I'm looking to be (a) champion rider."