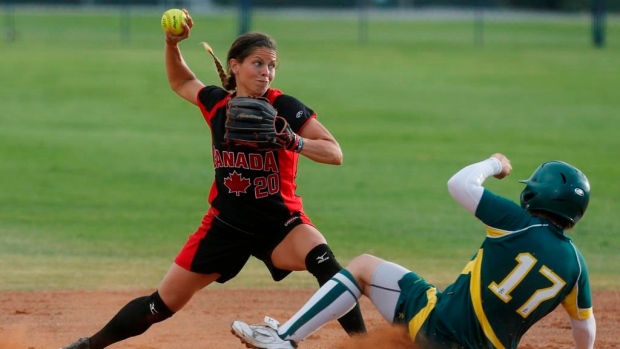 When softball player and Olympic 2022 hopeful Natalie Wideman was handed a cheque and told the money came from women she did not know, she was speechless.

"I instantly broke down crying," said the 27-year-old from Mississauga, Ont.

"Women helping women is just really, really, special to me."

Wideman wants to be Canada's catcher in Tokyo next year when women's softball returns to the Summer Olympics.

She says the $6,000 she received from Canadian Athletes Now, or Canfund, via a campaign of professional women supporting their athlete counterparts is crucial to her goal.

"Getting the cheque just gives me the opportunity to advance my training that much more going into Tokyo 2020, whether that means me being able to fly an extra time out to see my head coach in Halifax or I get the opportunity to go to Florida to see one of my hitting coaches, or extra physio appointments to make sure my body is taken care of, or not stressing out about nutrition because you know as athletes we eat non-stop and it gets expensive," Wideman explained.

Jane Roos is the fundraising juggernaut behind Canfund, which says it has put over $40 million in the pockets of Canada's athletes since 2003 and sent cheques to 80 per cent who competed in Olympic Games from 2004 to 2018.

The high-performance athlete community views Roos as a heroine. The money she raises all from the private sector helps fill the financial gaps in their lives.

In Canfund's round of applications in 2018, a record 941 athletes applied. Athletes can start applying again Thursday and Roos expects another record.

After the 2016 Rio Olympics, where women earned 16 of Canada's 22 medals, Roos saw an imbalance in her donor list.

So she set out to establish connections between women in the workforce and female athletes.

"We raise money for men, women, able-bodied, Paralympic," Roos said. "What this did was create another funding arm that wasn't there."

"When we call an athlete and say 'not only are you a Canfund recipient, your money came from women' there is a huge kind of pause," Roos said.

"I think when women get funded by women, they believe in themselves more a bit. I can't explain it."

Said Wideman: "It hit me like a ton of bricks. More spectacular than the actual cheque was these women really wanted me to experience all these great things and they wanted me to feel supported on this journey."

Canfund currently has a donor matching every contribution up to $3 million.

"This really spoke to me and it spoke to me on a number of levels," Cheng said. "I can't say I'm a true athlete. I'm a lawyer by day struggling to get in a little bit of exercise.

"Historically women have also been less inclined to be donors. Or maybe not encouraged."

Roos uses a video of the success of Canadian women in Rio show prospective 150 Women donors what the investment means.

Olympic champion wrestler Erica Wiebe was a Canfund recipient prior to her triumph in Rio.

While training with her teammates at a camp in Italy this year, the 30-year-old from Stittsville, Ont., and others on the national women's team were all told they would receive 150 Women sponsorships.

"The jaws just dropped and everybody just looked at each other and there were tears, laughter, it was absolutely insane," Wiebe said.

"No matter what industry you're in, the support from your female colleagues and your female friends is often a game-changer as to whether you're successful or not."

"Hands over her mouth, tears." Shulgan said. "She couldn't speak for a couple of minutes. It was so beautiful, powerful and empowering.

"Success takes support. When someone is being supported in what they're doing . . . it's irreplaceable to know you have someone there for you and when it's coming from someone you don't even know, it's even more so."

Note to readers: This is a corrected story. A previous version had the incorrect start date for Canfund.