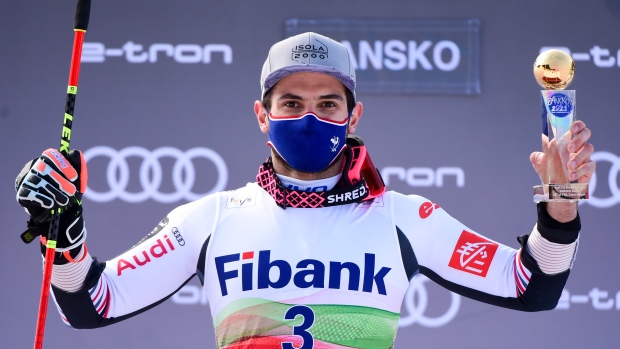 BANSKO, Bulgaria — Mathieu Faivre won a World Cup race for the first time in more than four years on Sunday, earning a pat on his back from French teammate Alexis Pinturault.

Faivre’s win came nine days after he took a surprise gold medal in giant slalom at the world championships. Pinturault was favourite in that race but skied out early in his final run, handing the victory to Faivre.

In Sunday’s GS, Faivre was simply faster than Pinturault in two runs on the Banderiza course.

Building on a big first-run lead, Faivre finished 0.75 seconds ahead of Marco Odermatt of Switzerland, who improved from sixth position.

Pinturault came 0.06 further back in third. Thibaut Favrot was 1.08 behind and was the third French skier in the top four.

Faivre also won gold in the parallel event at the worlds but had not triumphed in a World Cup race since his only previous win in Val d’Isère, France, in December 2016.

He came close in Saturday’s GS, when he also posted the fastest time in the opening leg before losing his advantage to Filip Zubcic of Croatia in the final run.

Faivre avoided a similar scenario on Sunday and added three-tenths of a second to his lead.

This time Zubcic couldn’t threaten his victory. The Croatian skier slid away on his inside ski in a left turn and finished more than three second off the lead after the opening run, though he still finished 14th following an outstanding final run.

The result reduced Zubcic’s chances in the battle for the season-long giant slalom title.

With two races remaining, Pinturault leads Odermatt by 25 points, with Zubcic 64 behind in third.

Pinturault and Odermatt are also 1-2 in the overall standings.

The men’s World Cup moves to Saalbach-Hinterglemm, Austria, for three speed races from Friday through Sunday.

The events were rescheduled from Kvitfjell in response to anti-coronavirus measures from the Norwegian government.