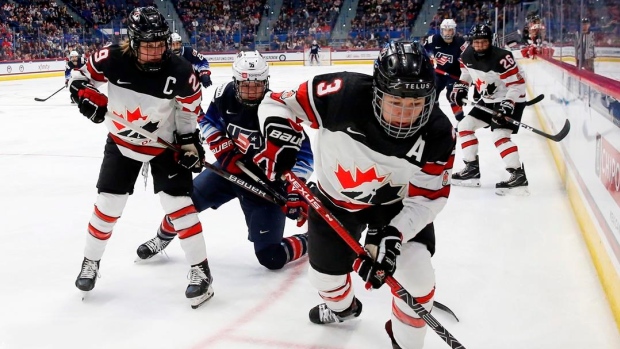 Despite the COVID-19 pandemic putting the sporting world on pause in March 2020, some women's sports leagues stepped up and took centre stage as games made their return.

From the National Women's Soccer League being the first North American professional team sport to return to action last year with the Challenge Cup to the WNBA pulling off a successful bubble season and continuing to lead the way on social justice issues, both leagues found themselves in the spotlight more than ever.

One sport that has struggled to sustain momentum in the wake of COVID-19 is women’s hockey.

With the exception of Dream Gap tour events early in the year and participation at the NHL All-Star Game in St. Louis, women’s hockey was largely off the map in 2020. The PWHPA was unable to hold Dream Gap events, the NWHL season was pushed back and all the major international events were postponed or cancelled.

While the WNBA saw its season pushed back from May to July, it managed to hold a shortened 22-game regular season and playoffs in a bubble at IMG Academy in Bradenton, Fla. It was a successful bubble where there were zero positive tests or outbreaks recorded.

Off the court, the WNBA stayed in the spotlight all season long with the continued activism of its players for Black Lives Matter. From dedicating the season to Breonna Taylor, who was killed by police, to postponing two days’ worth of games to protest the police shooting of Jacob Blake in Wisconsin, the WNBA led the way and have continued to carry that into the 2021 season.

Not being able to build momentum off of big events was tough for women’s hockey. In contrast, the NWSL was able to capitalize off the success of the USWNT at the 2019 Women’s World Cup, securing domestic broadcast deals with CBS Sports and Twitch. Year-over-year, NWSL’s domestic TV numbers were up 500 per cent. Since then, the league also added partnerships with Verizon, P&G and Secret, and Google. The 2020 Challenge Cup final peaked at 653,000 viewers.

Compared with the 2019 NWSL final (which aired on ESPN), the 2020 Challenge Cup Final logged a 293 per cent viewership increase.

The big challenge for women’s hockey has been getting on the ice. Pandemic restrictions made it difficult for players to gather and practise. After the 2021 Women’s Worlds, scheduled for April, were pushed back again to May in Halifax and Truro, N.S., they were cancelled just a day before players were set to arrive and quarantine. There was also no contingency plan in place to move the tournament to another venue if issues regarding COVID-19 were to arise.

The tournament was eventually rescheduled for August in Calgary.

The women’s U18 tournament scheduled for January in Sweden, was cancelled altogether.

By comparison, the men’s worlds, World Juniors and U18 tournaments were played this year with no issues.

Several of the game’s biggest stars, including Blayre Turnbull, Hilary Knight and Kendall Coyne Schofield expressed their discontent with the IIHF on social media. For Turnbull, it all came down to wanting to play.

“Our sport’s been through the ringer over the past two seasons, so at this point we’re just really happy to have the opportunity to play some hockey games.”

The beginning of 2021 has seen some of the momentum return. It saw the NWHL hit the ice at the end of January as they held a two-week season in a bubble in Lake Placid and welcomed a new expansion team in the Toronto Six. While it had its challenges, specifically with COVID-19 positive tests that delayed the playoffs for nearly two months, the Isobel Cup was awarded to the Boston Pride, who beat the Minnesota Whitecaps 4-3 in the final on March 27.

For the first time, the NWHL was shown on linear television as the Isobel Cup semifinals and final were broadcasted on NBCSN.

This also included tour stops in partnership with NHL teams, including at Madison Square Garden with the New York Rangers and the United Centre with the Chicago Blackhawks.

In Canada, the Toronto, Montreal and Calgary regions took to the ice in Calgary in May to compete in the Secret Cup.

Canadian captain Marie-Philip Poulin believes women’s hockey is on the right track despite a lot of upheaval the past two years.

“Obviously in everything there’s going to be ups and downs, and right now we’re going up and we believe in that,” said Poulin. “It’s going to start right here in Calgary with the world championship; it’s going to start with women’s hockey. Again, it’s been awhile that the best product has been on the ice and it’s just going to keep growing and keep going.”

With the puck set to drop on the women’s worlds on Aug. 20 and the Beijing Olympics less than six months away, it’s an opportunity to get the game back in the spotlight and regain some of the momentum that was lost when the COVID-19 pandemic hit.