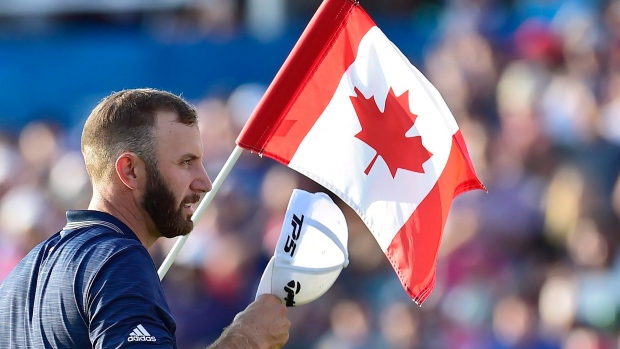 OAKVILLE, Ont. — As one of the most popular golfers on the PGA Tour, Dustin Johnson is used to roaring cheers and chants of "Let's go DJ!" But getting serenaded with "O Canada"? That's a new one.

Johnson pulled away from the field after a nearly two-hour rain delay to win the RBC Canadian Open for the first time on Sunday after firing 6-under 66 in the final round to finish at 23 under.

"I did hear it a couple of times, them singing 'O Canada'," said Johnson, laughing. "Especially with the amount of support I get when I come up here, it's been great. Everyone's been great to me.

He has some roots in southern Ontario, with his fiancee Paulina's father coming from Brantford, just 67 kilometres down the road from Glen Abbey. Paulina's father, of course, is all-time NHL leading scorer Wayne Gretzky.

Fans certainly didn't forget Johnson's connection to the hockey legend, with some in the crowd wearing Edmonton Oilers jerseys. Sporadic shouts of "Wayne!," "99!" and "Paulina!" could be heard from the crowd that got a chance to have a few extra beers during a one hour 45 minute weather delay.

"It was great all week, I had a lot of support out there, a lot of fans following me," said Johnson. "With my ties to Canada with Paulina and then her dad being Wayne Gretzky, it definitely helps. I get a lot of fans that pull for Wayne, they pull for me.

"It was a lot of fun out there this week. I thought I had a lot of support. It definitely helps."

Hun An had a ringside seat in Johnson's circus as the two were paired together for the final round.

"I think they came to watch me," joked Hun An. "Unfortunately I couldn't get in the playoff. But seeing the No. 1 in the world playing golf is quite exciting, and he's pretty good. But I tried really hard and tried to get to my second place."

Mackenzie Hughes (68) of nearby Dundas, Ont., was the low Canadian, tying for eighth at 15 under overall. A Canadian has not won the national title since Victoria's Pat Fletcher accomplished the feat in 1954 at Vancouver's Point Grey Golf and Country Club.

It's the second straight year Hughes has won the Rivermead Cup, the trophy awarded to the lowest scoring Canadian at the national championship.

"The Rivermead Cup has history here in Canada, and if you're not going to win the big trophy, the Rivermead Cup is a pretty good consolation prize," said Hughes. "The depth of talent in Canadian golf with 21 Canadians here this week, and not one guy in the field that was Canadian, you would say, 'oh, you've got no chance.

"Every one of those Canadian players are just so talented."

Johnson entered the day in a four-way tie for the lead with Kim, Hun An and Kevin Tway but had seven birdies and a bogey to pull away from the group. He started the day with a pair of birdies on his first two holes to pull away early, but a nearby lightning storm suspended play after his drive on the ninth hole.

After play resumed Johnson grabbed four more birdies on the back nine, only getting slowed by a bogey on the par-3 No. 12.

"It was definitely good to get off to a fast start," said Johnson. "That's definitely always good, especially when the leaderboard is so bunched up.

"I just needed to get out in front. If I could get ahead I felt like I could play well and keep myself in the lead for the rest of the day."

Golf Canada CEO Laurence Applebaum thought Johnson's victory was an appropriate sendoff for Glen Abbey. The Jack Nicklaus-designed golf course has been slated for redevelopment by ClubLink, the property's owner.

"This event has been one of our best ever," said Applebaum. "Started at the front of the week with Triple Crown winner Lee Trevino showing up for the Hall of Fame, and then the field we had. DJ, four of the five U.S. Open combatants, Bubba Watson, and the great Canadian roster.

"And then our world No. 1 showing his class, makes for a spectacular finish."

Hamilton Golf and Country Club will host the 2019 Canadian Open. It is also shifting forward in the PGA Tour's schedule, moving to early June in the week before the U.S. Open.