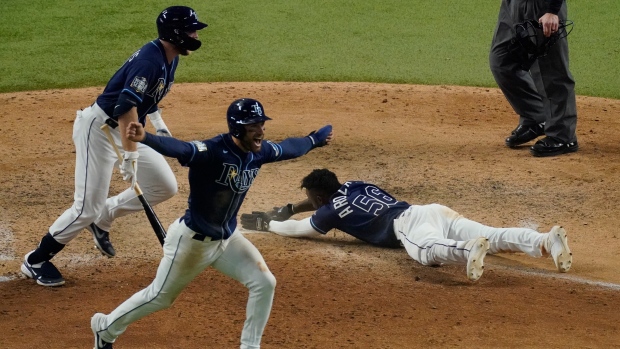 What just happened? Brett Phillips hit a walk-off double to score two and beat the Dodgers 8-7 in one of the greatest games and finishes in postseason history.

Dodgers come up short as well. To the bottom of the ninth we go. Dodgers can take a 3-1 series lead if they hold on.

After eight straight half innings of runs being scored, the streak has ended. Dodgers lead 7-6 heading to the ninth.

With two outs, Corey Seager came up clutch once again, hitting a bloop single over the shortstop's head to score Chris Taylor. At least one run has been scored in eight straight half innings, a World Series record.

There's now been a run scored in 8 straight half innings of Game 4, the longest streak in World Series history.

This is also the 1st game in World Series history where both teams scored in 3 straight innings.

Game 4 is officially a classic. Centrefielder Kevin Kiermaier went deep on Baez with nobody on base and we're tied 6-6. Having fun yet?

This game just keeps on getting better. With two outs and the bases loaded, Joc Pederson came up to bat as a pinch hitter for A.J. Pollock. With a 3-1 count, Pederson hammered a line drive to left field that was just out of reach of second baseman Lowe. Two runs scored and the Dodgers are back up top in a thriller from Texas.

Restoring his team's lead at 6-5 in the 7th inning of Gm4 tonight, Joc Pederson is the 1st @Dodgers player to record a multi-RBI hit as a pinch hitter in a #WorldSeries game since 1988 (Kirk Gibson's walkoff home run off Dennis Eckersley in Gm1 of their meeting vs the Athletics) pic.twitter.com/vcBf0ntX2V

Drama in the sixth inning. The Rays have taken a 5-4 lead after Brandon Lowe hammered a one out, three-run opposite field home run off Dodgers reliever Pedro Baez. It was his third home run of the World Series.

Another inning, another clutch two out RBI by the Dodgers. This time it was the number nine hitter, Enrique Hernandez, who hit a double off of Diego Castillo to score Will Smith and give Los Angeles a two-run lead once again.

Tampa is back to within one run of the Dodgers after Hunter Renfroe hit his second home run of the postseason in the fifth. Urías was pulled for Blake Treinen after throwing 4.2 innings with four hits, two earned runs, one walk and nine strikeouts.

Gone after 4.2 innings in Gm4 tonight, Julio Urias becomes the 1st @Dodgers pitcher to record at least 9 strikeouts in a #Postseason outing of fewer than 6 IP. He also joins Blake Snell (Gm2 for TBR) as the only pitchers with 9+ K in under a #WorldSeries appearance of under 5 IP pic.twitter.com/N99G1GZ9WG

Max Muncy smacked a two out single to centre that scored Seager and extended the Dodgers lead to 3-1.

Rays slugger Randy Arozarena set a MLB postseason record with his ninth home run of the playoffs. Arozarena's solo shot off Urías has pulled the Rays within one run of the Dodgers.

Yarbrough recorded one out in the inning before being pulled with a runner on second. His final line read: 3.1 innings pitched, five hits, two earned runs, one walk and one strikeout. Ryan Thompson is now in the game.

Urías is locked in. The 24-year-old has five strikeouts through three innings and has allowed just one hit.

Corey Seager added to the Dodgers' lead with a two out, solo home run, his eighth of the postseason. Dodgers lead 2-0.

Urías made quick work of the Rays in the second, retiring them in order.

Rays starter Ryan Yarbrough stranded a runner on second base by striking out Chris Taylor to end the inning.

Dodgers starting pitcher Julio Urías allowed one hit but no runs in his first inning on the mound.

For the second straight night, Dodgers third baseman Justin Turner has hit a opening inning solo home run to give Los Angeles an early 1-0 lead. He becomes the first player in World Series history to hit a homer in the first inning in back-to-back games.

For a 2nd straight game, Justin Turner has gone yard to give the @Dodgers a 1st inning 1-0 lead vs the Rays in Gm4 of their #WorldSeries tonight. With it, he has passed Duke Snider for the most career #postseason home runs by a player in @Dodgers franchise history (12) pic.twitter.com/2ZCZ6XWcip