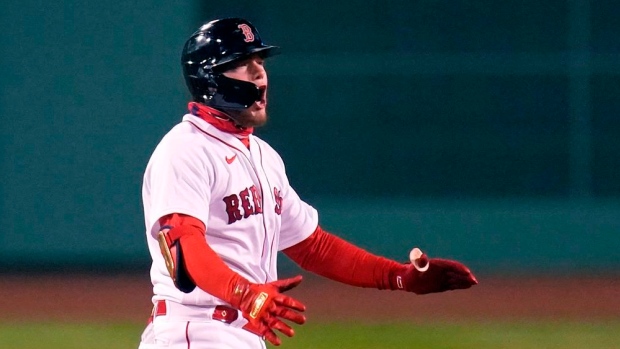 Bogaerts had four hits, including a Little League home run — a double, with two ill-advised throws that allowed him to score — and the Boston Red Sox got on the board on Monday night with 16 hits and their first win of the season, 11-2 over the Tampa Bay Rays.

After being swept by Baltimore in the opening series, never leading in any of the three games and yet to post a multi-run inning, the Red Sox went ahead 1-0 in the second on a double that was Franchy Cordero's first hit of the season.

“As an offence, we weren’t doing that much in the first couple of games. Him giving us that first RBI is one that we needed — to score first," Bogaerts said. "That was key for us, to get everything going in a positive direction."

The Red Sox added two in the fourth and two in the fifth, when the Rays threw the ball around until Bogaerts sauntered home. Boston scored two more in the sixth and four in the eighth, when J.D. Martinez banged a three-run homer halfway up the Pesky Pole for the team's first home run of the season.

Cordero, Alex Verdugo and Hunter Renfroe all had two hits apiece after coming into the game batting .000. Nick Pivetta (1-0) gave up two hits in five shutout innings, walking four and striking out four to end the Rays’ eight-game winning streak at Fenway Park.

“That’s always a great feeling, when you go out and you know you’ve got a ... lead and it bumps up from there,” Pivetta said. “That’s really huge, everybody coming around, and I’m just excited to see where it goes from here.”

Tampa Bay got three singles in the eighth before Darwinzon Hernandez walked Manuel Margot and pinch-hitter Yandy Díaz with the bases loaded to make it 7-2. But Hernandez fanned Willy Adames to satisfy the three-batter rule, then Adam Ottavino struck out Mike Brosseau on a 3-2 slider to end the threat.

Michael Wacha (0-1) was charged with five runs — four earned — on eight hits and two walks, striking out six in five innings. The Rays have lost two straight since opening the season with back-to-back wins over the Marlins.

The Red Sox were outscored 18-5 in the opening series against Baltimore, which finished fourth in the AL East last year — one game ahead of Boston. And things didn't look to improve against the defending division champs, who had won 13 of 14 at Fenway Park since August of 2018.

“After a disappointing weekend, having that team here — the defending American League champs — it was good,” Red Sox manager Alex Cora said. “Hopefully we can come tomorrow and do the same thing.”

Pivetta, who was acquired from the Phillies last season, held Tampa Bay hitless for the first three innings and was staked to an early 1-0 lead.

Boston added two in the fourth, but it could have been more if not for Randy Arozarena's diving leap to catch Renfroe's liner to right-centre. The Rays' defence hurt them in the fifth, though, when Bogaerts hit a line drive to right-centre with two on and one out that bounced off the bullpen wall.

Arozarena dove to grab the carom, fired the ball in to the cutoff man and he relayed it to catcher Mike Zunino, late and up the first-base line. Bogaerts broke for third on the throw and Zunino threw the ball into left field, allowing the runner to trot to the plate.

According to the Elias Sports Bureau, Marwin Gonzalez is the first major leaguer since 1900 to start a team’s first four games of the season at four different fielding positions. He played left field, second base and third base against the Orioles before starting at first on Monday. Last year, Jonathan Villar had four different positions to start the season but one was designated hitter.

Rays: CF Kevin Kiermaier came out of the game in the middle of the third inning with left quadriceps tightness.

Red Sox: Bogaerts remained in the game at SS after a glancing brush with 3B Rafael Devers going for a ball in the hole. ... LHP Eduardo Rodriguez was to throw a bullpen session Monday with an eye toward coming off the injured list. Rodriguez, who was slated to pitch the opener before suffering from a dead arm in spring training, could be eligible as soon as Thursday.

“He’s going to be with us sooner rather than later,” Cora said after the game. “There’s a good chance he’ll be with us during the week.”