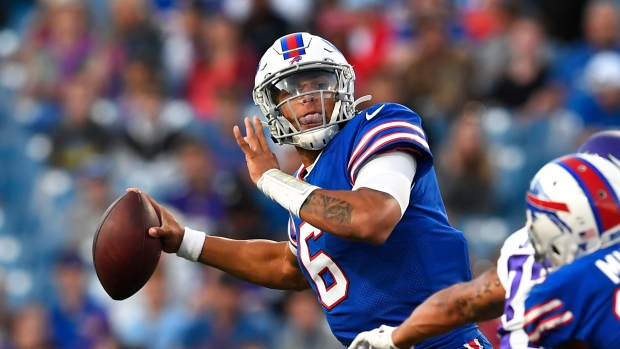 DC Defenders quarterback Tyree Jackson got his first taste of the XFL in the team’s 15-6 win over the St. Louis BattleHawks on Sunday.

Defenders QB Cardale Jones started the game, but was pulled in favour of Jackson after throwing an interception early in the contest.

Jones, who was off to an incredible start to the season, threw for four touchdowns in his first two games. In his previous three, Jones appeared to be snake bitten as he has failed to record a touchdown but has thrown six interceptions.

His performance has contributed to the Defenders recent slide, having lost two in a row and being outscored 64-9 in their last two games.

Fortunately for DC, It took Jackson only one series under centre to make his impact felt.  In a matter of four plays, Jackson had his first XFL touchdown as he connected with Khari Lee for a nine-yard touchdown to give the Defenders the lead.

In a game that was supposed to see a collision of the two best quarterbacks in the league in St. Louis’ Jordan Ta’amu and DC’s Cardale Jones, it was the defensive units of both teams that controlled the action.

Though both teams gave up over 250 yards on the day, Jackson’s early touchdown would remain the only one as both teams would lean on their kickers for points.

Ty Rausa of the Defenders had a busy day going three-for-three as his nine points helped DC pad their lead during the game.

Try as they might to make a comeback, the BattleHawks were able to string together a couple impressive drives, but the Defenders defence was too good. Holding them to only two field goals, the effort DC put on the defensive side of the ball helped secure the victory.

With the Defenders victory over the BattleHawks, both teams now sit at 3-2 and join the New York Guardians in a three-way tie for first place in the East.

The Defenders will play out of conference next week when they take on the Dallas Renegades who are coming off a loss to the New York Guardians. St. Louis on the other hand will stay in the East as they take on the new and improved Tampa Bay Vipers.

The Los Angeles Wildcats clawed back from an early 18-point deficit to beat the Tampa Bay Vipers 41-34.

The Vipers, who were off to a commanding start as they led the Wildcats 23-6 midway through the second quarter, looked to be in complete control.

On the offensive side of the ball, the Vipers generated scores both on the ground and through the air.

Defensively, they forced Wildcats’ quarterback Josh Johnson to throw an interception on the very first play of the game, which would later lead to a field goal.

With all that was going right for the new-and-improved Vipers, all signs pointed to them cruising to another shutout victory just as they did in DC last week. This was until quarterback Josh Johnson and the Wildcats offence started to click.

Opting to scrap the run game and attack Tampa Bay through the air, Johnson was able to pick apart Tampa Bay. He threw for 288 yards and four touchdowns while completing the comeback, outscoring the Vipers 41-17 after trailing.

Coming into this game, the Vipers led the league with the lowest yardage allowed with 237.3 per game. Their defence has arguably been their most successful unit so far as just last week they held Cardale Jones and the DC Defenders to 109 yards.

This was not the case against Los Angeles, as they gave up a combined 345 yards in the loss.

In Vipers’ efforts to reclaim the lead once it was out of sight, they struggled mightily with turnovers and third-down conversions. Converting only 36 percent on third down and throwing two interceptions opened the door for Los Angeles to capitalize on their mistakes.

As the XFL schedule passes the half-way point, the Vipers now 1-4 are on the outside looking in and will look to rebound against the St. Louis BattleHawks next week. The 2-2 Los Angeles Wildcats will take on the sliding Seattle Dragons, who have lost back-to-back contests.