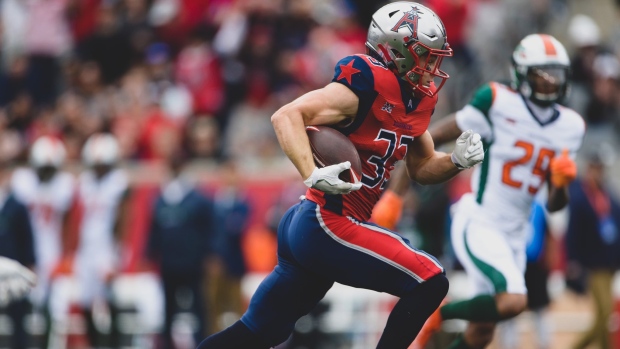 The 12-points generated off Houston turnovers would not be enough for Seattle to contain the Roughnecks offence in Houston’s 32-23 win.

Houston appeared flat in the first quarter as they found themselves down early. Seattle's B.J. Daniels - who got the start over Brandon Silvers - got the scoring started as he scrambled into the end zone, followed by Trey Williams who also scored on the ground. They followed their second touchdown on the day with a successful two-point conversion to go up 14-0.

Near the end of the second quarter was when P.J. Walker and the Roughnecks offence came alive.

Walker shared the ball around to his offence, connecting with three different receivers for 24 yards before completing a deep ball to Nick Holly for a 50-yard touchdown.

Houston attempted the three-point conversion but it was unsuccessful and trailed by eight.

The Roughnecks defence followed the score up up a defensive stand, giving Walker on more chance to put points on the board before the half.

With 16-seconds left in the second quarter, Houston tied the game up at 14 after James Butler ran up the middle and Walker connected with Holley for a two-point conversion.

Seattle reclaimed the lead in the third quarter as Ernesto Lacayo knocked down a 47-yard field goal attempt. Seattle’s defence did their part picking off Walker and returning it all the way down to the Houston one-yard line where B.J. Daniels would punch it in, putting Seattle up nine.

An unsuccessful two-point conversion swung the momentum in Houston’s’ favour as it took them four players to make cover 63-yards which ended in another Butler touchdown.

Walker connected with Cam Phillips for touchdowns on back-to-back possessions to increase their lead and bring the score to 32-23.

While throwing two interceptions on the day, Walker looked strong again as he turned his game around in the second half. finishing the day with 325-passing yards and three touchdowns.

After sitting for the opening weeks of the season, Seattle's Daniels had yet another strong performance, completing 64 per cent of his passes for 122-yards, rushed for 30-yards and a pair of touchdowns but failed to throw for a touchdown.

Houston will have the chance to continue their undefeated ways as they take on the New York Guardians next week. Seattle on the other hand will take on Los Angeles Wildcats.

In his second week as a starter, New York Guardians quarterback Luis Perez picked up another win, throwing for 229 yards and a touchdown as they defeated the Dallas Renegades 30-12.

In a battle of the second string quarterbacks-Perez and Phillip Nelson, who started for the Renegades -it was the kickers who staged the real showdown in the first half of the game.

Both Austin MacGinnis of the Renegades and Matthew McCrane of the Guardians traded field goals for the first quarter-and-a-half, making it 6-6 until Marquise Williams found the end zone on a designed QB rush to interrupt the kicker stalemate.

A wild minute of game time would turn the action on its head.

Starting with the Guardians, Perez connected with Colby Pearson for an 80-yard touchdown at with 03:31 left to go in the third quarter. Moments later, New York would strike again. This time it was defensive end Ryan Muller batting a ball down, intercepting it and running it back for a 33-yard touchdown with 02:48 left.

Dallas return man Austin Walter was the next to strike as he ran back a kickoff 97 yards for a Renegades’ touchdown, cutting the deficit to 27-12 with 02:38 remaining in the third-quarter.

The next score wouldn’t come until the mid-way through the fourth quarter where McCrane would add his third field goal of the night, sealing the Guardians 30-12 win.

New York now winners of two-straight games will look to stay hot next week against the undefeated Houston Roughnecks.

Dallas, now losers of two-straight games, will take on the DC Defenders, who have yet to see action this week and will face the St. Louis Battlehawks on Sunday.