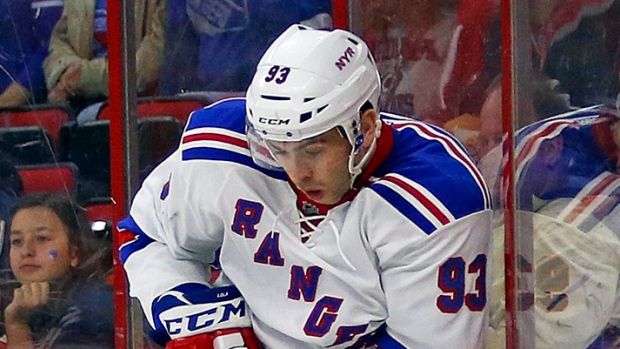 In his first nine games for New York, Yandle was barely noticeable and had just one point to show for it. But he broke out with three assists in a 7-2 win over Anaheim on Sunday and had more of a complete game the Rangers hope to see more of down the stretch and most importantly in the playoffs.

"You just want to come in and help the team win and not take the groove out of anything," Yandle said at Madison Square Garden after his best game yet with the Rangers. "You want to find your role and stay with it.

"I think learning from guys and learning to play with guys it's been a little bit of a change, obviously, but I think it's coming together."

Yandle is a puck-moving, offensive defenceman the Rangers got for his ability to pile up points. They're set in the shutdown department with captain Ryan McDonagh and alternates Dan Girardi and Marc Staal.

Since the Rangers have been building a lead atop the Metropolitan Division, the pressure hasn't mounted on Yandle, who has worked with assistant and former NHL defenceman Ulf Samuelsson to adjust to new systems. The coaching staff is pleased with the 28-year-old's play despite the lack of production.

"Sometimes offensive players they might not get on the scoresheet, but they're doing a lot of other things right, and Keith has been playing real well for us," coach Alain Vigneault said. "I think as we move forward here, he's only going to get more comfortable with this group and he's only going to play better."

Yandle's workload has increased to over 20 minutes a game with power-play duties included. Vigneault said he asks the same of Yandle that Coyotes coach Dave Tippett did: "Make sure you play hard at both ends of the rink."

With help from Samuelsson, who was a Coyotes associate coach for almost all of Yandle's NHL career, the Boston native said his defensive-zone play has been better than earlier this season.

Systems aside, adjusting from playing on a last-place team in Arizona to a Presidents' Trophy contender in New York came with its challenges. It eventually "soaked in" when he looked at the standings, but Yandle didn't just start playing and caring when he got traded.

"Even when you're in last place you still try to play the same way every night, that's part of it being your job," he said. "I think the mind-set is you've got to stay the same way whether you're in first or last. But it's nice being on a team like this."