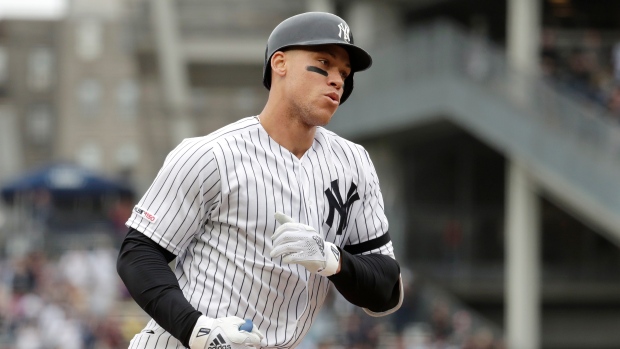 NEW YORK — Yankees star Aaron Judge has left a game with an undisclosed injury, exiting after gingerly making his way to first base on a single.

There was no immediate word Saturday on his condition.

Judge was pulled in the sixth inning after his hit against Kansas City. He had homered in the first for a team already missing a dozen players because of injuries.

The slugger appeared to feel something on his single and laboured to run it out. Trainer Steve Donahue immediately came from the dugout to check on Judge, who then left.

Judge hit his fifth home run and is batting .288 with 11 RBIs. The right fielder has played in every game this season.

Of their injured players only Sanchez appears close to returning. Before the game, manager Aaron Boone said the catcher could return from a strained left calf Wednesday in Anaheim against the Angels if there are no problems in a minor league rehab game on Monday.