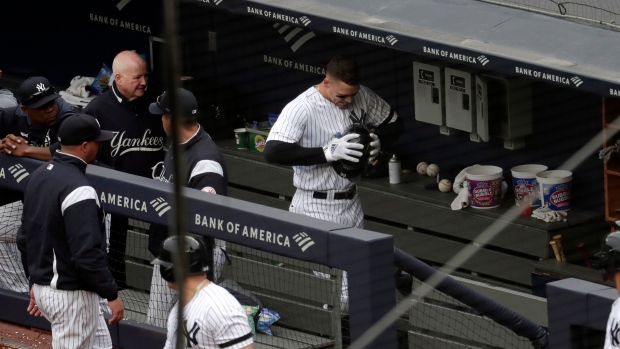 The New York Yankees got the news they were fearing on Sunday.

After leaving Saturday's game against the Kansas City Royals in the sixth inning with an injury, the Yankees announced Sunday that Judge has been placed on the 10-day injured list with a left oblique strain.

Prior to today’s game, the Yankees placed RF Aaron Judge on the 10-day injured list with a left oblique strain and recalled INF Thairo Estrada from Triple-A Scranton/Wilkes-Barre.

Infielder Thairo Estrada has been recalled from Triple-A Scranton/Wilkes-Barre.

Judge appeared to incur the injury on a swing that resulted in a single to right field. He grabbed his left side as he exited the batter's box and ran gingerly to first base. Seconds after arriving, he was replaced by pinch-runner Tyler Wade and immediately went to the dugout and down the tunnel. The Yanks went on to win the game 9-2.

Judge later went to the hospital to get an MRI.

Manager Aaron Boone called it a "pretty significant strain" and added that it could be weeks before Judge can return to action.

The injury to Judge now gives the Yankees a whopping 13 players on the injured list, including Giancarlo Stanton, Greg Bird, Aaron Hicks and Luis Severino.

New York (10-10) will wrap up their series at home against the Royals on Sunday before heading out west to begin a nine-game road trip starting against the Los Angeles Angels on Monday.