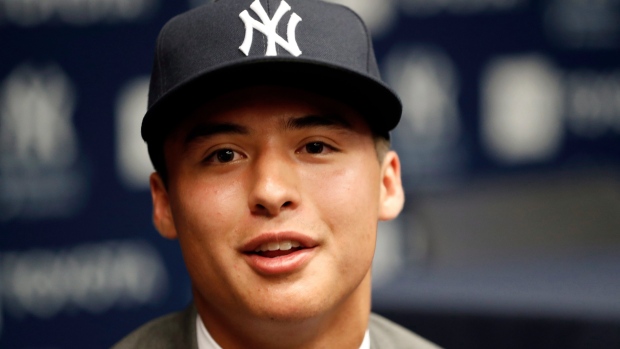 NEW YORK — The New York Yankees have signed first-round draft pick Anthony Volpe, a high school shortstop from nearby New Jersey, for a bonus of $2,740,300.

Volpe, who grew up a Yankees fan, was introduced to the media Monday at Yankee Stadium before the team's scheduled Subway Series game against the New York Mets was rained out. He met manager Aaron Boone and players in the clubhouse, and says the whole experience has been a "surreal" dream come true.

Listed at 5-foot-11 and 180 pounds, Volpe was selected with the 30th overall pick last Monday night out of Delbarton School. He passed up a college commitment to Vanderbilt to sign with the Yankees, saying it was the hardest decision of his life.

Volpe lived in Manhattan as a child before moving to New Jersey. He says Derek Jeter was his favourite player and he wears No. 7 because Mickey Mantle was his grandfather's idol.

Volpe was one of a record nine shortstops picked in the first round of the draft this year. He signed for above the slot value of $2,365,500