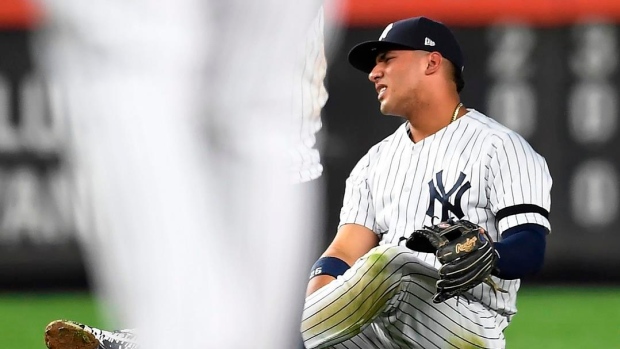 The team announced the results about 15 minutes before New York played the Toronto Blue Jays on Saturday. Torres was not in the lineup for the 7-2 win and also won't play Sunday, but he said he feels good.

"Last night, scary moment," he said. "After that play I felt really good, but during the couple innings later, I started to feel like, not powerful, weak, and I prefer to be smart and be safe with my leg."

New York will be cautious with Torres despite the promising diagnosis. The AL East champions have six more games after Saturday before opening their post-season Oct. 4.

"I felt like he was going to be OK," Boone said. "But still, once you kind of get that news, because you know MRIs are going to find things, so the fact it came back clean kind of confirmed what we had hoped."

Torres slipped after backhanding a grounder Friday night, prompting an audible gasp from the Yankee Stadium crowd. He was pulled later and felt weakness in his lower legs.

The 22-year-old Torres leads the team with 38 homers and is hitting .284 with 90 RBIs and an .889 OPS. The 100-win Yankees are in a tight race with Houston for home-field advantage, and Boone is trying to strike a balance between battling the Astros and resting his stars.

"Any ailments we're dealing with, taking care of that trumps everything," Boone said.

Edwin Encarnación (oblique) could return to the lineup during the upcoming midweek series against Tampa Bay. He's a bit ahead of catcher Gary Sánchez (groin tightness), but Boone said Sánchez could be back for the final series at Texas. Boone is "confident" Sánchez will be ready for the playoff opener.

The Yankees will honour retiring left-hander CC Sabathia before Sunday's game. New York plans to put Sabathia in the bullpen for the post-season, and the 39-year-old is expected get a practice run with his second career relief appearance on Tuesday at Tampa Bay.