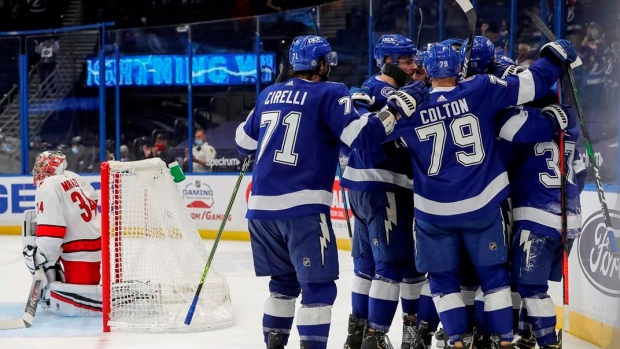 TAMPA, Fla. — Yanni Gourde scored 2:50 into overtime and Alex Killorn had a Gordie Howe hat trick to give the Tampa Bay Lightning a 3-2 victory over the Carolina Hurricanes on Monday night in a critical matchup between Central Division contenders.

Brayden Point also scored for the Lightning, and Andrei Vasilevskiy made 25 saves for his NHL-leading 27th win.

“There’s two good teams out there and we had a game plan in place and they executed it,’’ Tampa Bay coach Jon Cooper said. “The guys did a good job.’’

Andrei Svechnikov and Brady Skjei scored for Carolina, which has only one regulation loss in the past eight games. Petr Mrazek stopped 33 shots.

“It wasn’t good enough,’’ Hurricanes coach Rod Brind’Amour said. “We got lucky to get a point out of that. Our goalie bailed us out. We had spurts where we were playing right, but it wasn’t good enough. We played the best team in hockey and we can’t play two periods like that and expect to get anything out of it.”

Carolina and Florida are tied for the Central Division lead with 63 points, though the Hurricanes have two games in hand. The defending Stanley Cup champion Lightning are one point behind the co-leaders.

Gourde found a loose puck alone in the right circle and, after his initial shot was stopped by Mrazek, was able to put in the rebound before the Carolina goaltender could reach back. It was Gourde’s 16th goal of the season.

“I tried to get a shot off as quick as I could and was fortunate enough to get a rebound,’’ Gourde said. “I just followed through with it and then go to the net and that’s where usually I score my goals.’’

Killorn picked up an assist on the winner to complete the Gordie Howe hat trick with a goal, an assist and a fight -- which came in the third period against Jake Gardiner after Killorn delivered an open-ice hit on Martin Necas.

“Whenever you get a fight you’re always hoping that you could get a goal and assist,’’ Killorn said. “To get it on a game-winner in overtime is really special. They gave me the puck and everything, so a pretty cool moment.’’

Killorn opened the scoring after taking a pass from Tyler Johnson off the boards to skate in on a breakaway. Killorn pulled the puck to his backhand and lifted the shot over Mrazek at 14:42.

Point got his 300th career point on his 19th goal of the season after deflecting Ondre Palat’s shot-pass on the power play at 2:08 of the second period.

Svechnikov cut the lead to 2-1 just 10 seconds into a power play with a wrist shot from the left point.

Skjei pulled the Hurricanes even 1:08 into the third as he cut down from the left point to intercept a pass from Alex Barre-Boulet and beat Vasilevskiy with a wrist shot from the slot.

“I think we can learn from this,’’ Skjei said. “I don’t think we played the full 60 and it showed. We had good spurts of play but overall it wasn’t our best. Petr played a heck of a game. We’ve got to come back tomorrow, so we’ll learn a few things on video and get right back at it.”

Johnson, who has played his entire NHL career with the Lightning, has endured his share of struggles this season, including Saturday in a loss to Florida when he was responsible for a late-period turnover and failed coverage. Cooper removed Johnson from the power-play rotation after holding a conversation with the veteran centre earlier in the day.

“I’ve coached him a long time and I trust him as a player,’’ Cooper said. “He’s had many, many, many more ups than downs. When you go through this you just have to stand with your player and try to have him work his way out of that. Part of that is to work on the 5-on-5 game and then take steps from there. He’s a consummate pro and I’m sure he’s going to work his way out of this.’’

Carolina continues to carry three goaltenders on the active roster, with Mrazek, James Reimer and Alex Nedeljkovic. Mrazek, who missed two months with a fractured thumb, and Nedeljkovic both have sub-2.00 goals-against averages while Reimer leads the team with 14 wins.

With the playoffs less than a month away, Brind’Amour wants to use more of a set rotation.

“Do we have a plan? Yeah, but we are basically going day to day on how we want to focus it,’’ Brind’Amour said. “And it’s tough on those guys because no matter what, you are not going to make everybody happy. So we have to do what is best for the group and we probably have to lean toward two guys more just to keep them sharp. You don’t want to have guys getting stale.’’

The teams play again on Tuesday.