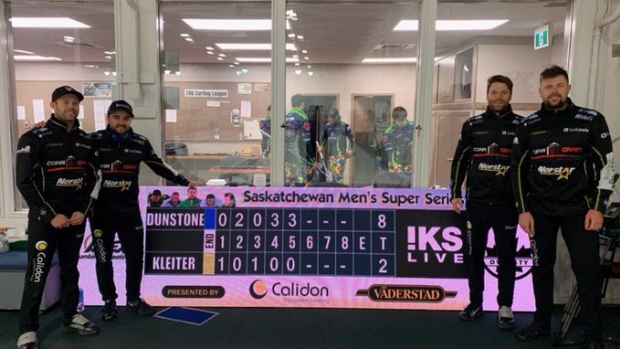 Regina's Team Matt Dunstone started their pandemic delayed season off on the right foot with a victory at the Saskatchewan Men's Super Series.

In the final against Team Rylan Kleiter of Saskatoon, Dunstone put up three spots in the fourth and fifth ends en route to commanding 8-2 victory.

🏆 Winner winner! First event of the season and man did it feel good to be back out there competing again!! #SaskSuperSeries #CalidonLeasing #Vaderstad pic.twitter.com/UEBwjbMusZ

Team Dunstone, who finished third at last year's Tim Hortons Brier in Kingston, Ont., helped put the five-team event together to give elite-level curlers in the prairie province a chance to play.

Dunstone, third Braeden Moskowy, new second Kirk Muyres and lead Dustin Kidby went 3-1 in the round robin, including a 6-5 win over Team Colton Flasch. Flasch is skipping his own foursome this season after playing a couple seasons with Team Kevin Koe in Alberta.

Koe scored two with hammer in the first end before stealing another pair in the second. Harty, third Kyler Kleibrink, second Joshua Kiist and lead Kurtis Goller then scored in four consecutive ends, including a steal of two in the sixth to take a 6-4 lead. After a blank in the seventh, Harty stole another deuce in the final end to seal the 8-4 win.

Thanks for watching this weekend and to our hosts @atbfinancial for helping put on a great spiel here in Banff. We came up short in the final but we'll see you next from Okotoks in a few weeks where you'll once again be able to watch all of our games. pic.twitter.com/ME7Xp5Ly33

Harty posted a total record of 7-1 with the only loss coming in the round robin against Koe.

Team Koe, who were playing in their second event with new second John Morris, defeated Team Brendan Bottcher, 8-3, in the semifinals. Last weekend at the McKee Homes Fall Curling Classic, Koe and company fell to Team Aaron Sluchinski in the quarterfinal round.

Schwaller, third Michael Brunner, second Romano Meier and lead Marcel Käufeler went 5-1 over the four-day event, including wins over Jaap van Dorp of the Netherlands in the quarterfinal, 8-0, Joel Retornaz of Italy in the semifinals, 7-6, and Bjorn Jungen, also from Switzerland, in the championship game, 7-2.

Other notable names included Sweden's Niklas Edin and Switzerland's Peter De Cruz, who lost in the quarters and semis, respectively.

Had one slip away from us in the final today here in Morris but we have lots we can build on from this weekend! Congratulations to @TeamRWiebe on a very well-played win! We will be back on the ice next weekend at @atkinscurling Classic! #toughending #zackosinturn #rust pic.twitter.com/9YdoajfWGl

Morris CCTC champs! Real gritty effort from the boys today and we have clinched our spot for Viterra Men’s provincials! Thanks to the Morris CC, and Lorne and Chris Hamblin for keeping the event Covid friendly. #peepthenewthreads 👀 pic.twitter.com/G6GhCsMjrL

On the women's side of the draw, Darcy Robertson also got the better of a defending Canadian and world junior champion by edging Mackenzie Zacharias in the final, 7-6. With hammer, Team Robertson scored two in the last end to win the bonspiel.

Thrilled to start the season off with a win and a spot in the 2021 provincials! 🎉 Thank you to @CargillCurlTC for putting on a great event and for making us all feel safe and comfortable while playing the sport we love! 🥌 pic.twitter.com/Tg8hStbaXv