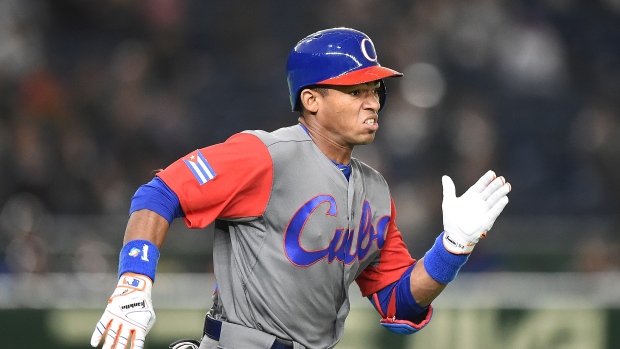 There could be another Cespedes on the way to Major League Baseball.

MLB.com's Francys Romero reports that Yoelkis Cespedes, the 21-year-old half-brother of New York Mets slugger Yoenis Cespedes, has defected from the Cuban National Team while in Dayton, OH to partake in the CanAm League's International Showcase.

In April, the Trump administration cancelled MLB's agreement with the Cuban Baseball Federation that would have made it easier for players to sign with MLB clubs and it would not have required defection. The agreement, which took three years of negotiation, was meant to ensure that risky and potentially life-threatening escapes from the island nation were no longer necessary.

An outfielder himself, the younger Cespedes was a member of Cuba's 2017 World Baseball Classic in which he went for 4-for-16 in five games for the tournament.

The elder Cespedes, out for the season with a foot injury, defected in 2011 and made his MLB debut the following year with the Oakland Athletics.

A two-time All-Star, Yoenis Cespedes has played seven years in the majors with the A's, Boston Red Sox, Detroit Tigers and Mets.