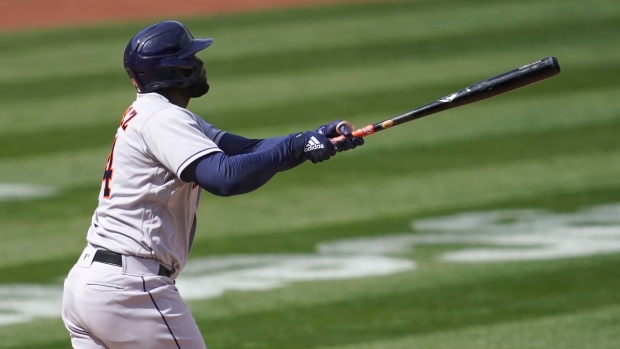 OAKLAND, Calif. — The Houston Astros just keep sluggin' through all those boos.

Yordan Álvarez hit a three-run homer and the Astros earned a third straight win against the rival Oakland Athletics, 9-1 on Saturday.

“It feels great coming out of the gates swinging the bats like that," Álvarez said.

Houston has outscored Oakland 26-7 in three games against the defending AL West champion A's, who were eliminated by the Astros in a four-game AL Divsion Series last fall.

“That's our thing, we've got to keep scoring, make it easier on our pitching staff," Astros manager Dusty Baker said. “You're not going to score them all the time but when scoring's going good you just keep on scoring. And always talk about try to win the seventh, eighth and ninth.”

Lance McCullers Jr. (1-0) did his part, too. The Houston right-hander struck out seven and walked three in five innings, allowing two hits and one run.

"It’s just what we were expecting out of camp,” McCullers said of Houston's hot start in spite of all those Oakland fans still upset about the Astros' sign-stealing scandal.

Kyle Tucker hit an RBI single in the first to stake Houston to a quick lead. The A's evened it on Mitch Moreland's sharp single up the middle in the bottom half.

José Altuve hit a go-ahead single in the top of the second to help back McCullers.

McCullers' pitch count rose quickly and he threw 95 pitches after going to 3-0 counts with three of his first four batters faced. He adjusted his delivery after a first-inning mound visit.

Brooks Raley earned a five-out save.

The A's missed a big chance when Chad Pinder flied out to the warning track with the bases loaded to end the eighth.

“They’ve come out swinging the bat well and throwing well,” Oakland first baseman Matt Olson said. “... It’s not the best start for us but we can compete with these guys, and we will.”

Lefty Cole Irvin (0-1) allowed four runs on seven hits in 4 1/3 inning in his A’s debut after pitching the past two seasons for the Phillies.

The A’s are 0-3 to start a season for the eighth time in Oakland history and first since 1996.

Baker hit up a nearby favourite Mexican restaurant in East Oakland a day after burritos were delivered to the clubhouse. This time, the thoughtful Astros manager secured some traditional Mexican stew called pozole for Sunday starter José Urquidy, a native of Mazatlan, Mexico.

The A's played Carrie Underwood's song “Before He Cheats” during the Astros pregame introductions — a play on the sign-stealing scheme brought to light by Oakland right-hander Mike Fiers in November 2019. This is the Astros' first visit to the Coliseum with fans in attendance since then.

Astros: LF Michael Brantley was hit by a pitch in the top of the first and left the game shortly after. “He couldn’t feel his fingers,” Baker said. “They took him for X-rays. Fortunately for us nothing was broken. He’ll probably be sore. He couldn’t turn the bat head over.” ... 3B Alex Bregman had a planned day off after hitting home runs in each of his first two games with five RBIs.

Athletics: CF Ramón Laureano was out of the lineup a day after suffering a jammed left wrist diving into first. X-rays showed no structural problems. “He's OK. Typically it's a little bit sore the next day,” Melvin said. “He tends to heal pretty quickly but I'd guess he'll be down for a couple of days.” ... C Sean Murphy, a late scratch Friday because of a bruised right hand, felt better but Melvin won't push him back too soon at this early stage, saying, “We want these things to completely heal before these guys come back.” ... Fiers, on the 10-day injured list retroactive to last Monday with a lower back strain, is slated to pitch three innings Monday for the club's Stockton alternate site group against the Giants' Sacramento affiliate.

Urquidy makes his 13th career start and 15th appearance overall when he pitches the series finale. The A's will counter with lefty Sean Manaea, who went 4-3 with a 4.50 ERA in 11 starts last year.

“Definitely don’t want to be swept in a four-game series," Olson said.