We are in the midst of a fascinating Norris Trophy race. Oddsmakers and betting markets have retreated to an area of comfort. But are they handicapping the race to be named the National Hockey League’s top defenceman correctly?

With just a few weeks left in the regular season, most betting markets have turned the No. 1 spot over to Tampa Bay Lightning veteran Victor Hedman. The 30-year-old blueliner has been nominated for the award four times and won it back in 2018. Hedman has a compelling argument again this season. He is comfortably the best defender on one of the league’s indomitable franchises, plays a ton of minutes in all situations, and is a reliable offensive contributor.

Hedman is having a strong season – a very strong season by Norris Trophy standards, which tend to put extreme emphasis on a player’s usage rates and point totals. Voters have long embraced the notion that the modern NHL defenceman is one who is just as much involved offensively as he is defensively, but how we quantify those contributions tends to vary.

If we sample the top 10 of the prospective Norris Trophy race by way of the betting markets right now, we see that the players are (a) on playoff-calibre teams; (b) play a lot of minutes; and (c) have racked up point totals at a significant rate.

It’s rudimentary, but it’s also a very fair proxy for how voting tends to play out:

On one hand, it’s great to see that just a handful of traditional statistical measurements do elevate quality first-pairing defenders to the top of the leaderboard. On another hand, this sort of voting strategy is vulnerable to missing the mark on two fronts.

First, it assumes that the coaching staff of the respective player has allocated his minutes properly, and that more usage is correlated with stronger production. Second (and perhaps of greater concern), it assumes that points are a strong proxy for offensive contribution. That’s why every single one of these players – save Cale Makar and his relatively weak usage due to an injury that forced him to miss a number of games – grades well in both areas.

We have seen instances in the past where defenders with significant point totals were driving the lion’s share of the team’s offence, Detroit’s Nicklas Lidstrom and Ottawa’s Erik Karlsson being two obvious examples. But high rate scoring isn’t a perfect proxy for offensive contribution, much like heavy usage rate isn’t a proxy for strong defensive play.

I’ve long thought that the mark of a quality Norris Trophy defender is their ability to positively influence net goal differential over the course of the season. Among other things, it puts a similar premium on offensive performance and defensive performance – an elite offensive defender and an elite defensive defender may end up with the same net goal contributions despite accomplishing it in an entirely different manner.

So, what if we took the earlier table and brought in each player’s net goal contributions over the course of the season? Well, it changes the math quite a bit:

When you start leaning on net goal differential, players like Makar, Vegas’ Shea Theodore, and New York’s Adam Fox start to stand out. We expect some of that – after all, they are the most-utilized defenders on two Stanley Cup contenders. But they also become interesting to juxtapose against players who may not come off as impressively here, like Hedman and Los Angeles blueliner Drew Doughty.

Hedman and Doughty have had weaker goaltending performances, which explains some of this, but they also have weaker expected goal rates. If you plot out cumulative net goal differentials for these four skaters (as one example), you start to understand the risks with heavily anchoring your Norris criteria to usage and rate scoring. 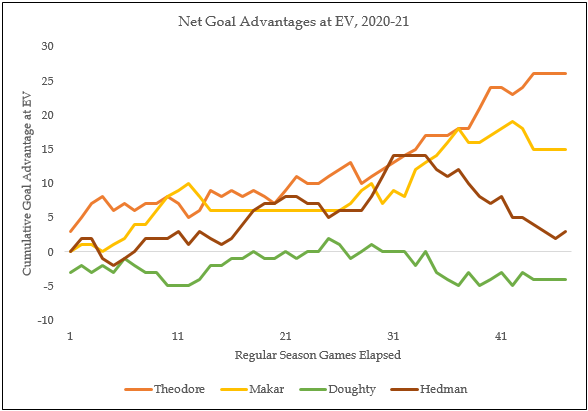 It is not an insignificant question: why are the Tampa Bay Lightning just +3 goals at even strength with Hedman on the ice this year, and +23 goals with Hedman off? Los Angeles is abysmal (-20) with Doughty off the ice, but they aren’t breaking even with Doughty’s unit on the ice either. And those numbers pale in comparison to what we have seen Hedman and Doughty do over the years: 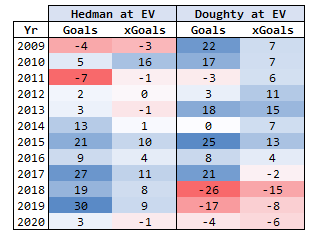 This, much like usage and scoring totals, is not a singularly defining metric. Turned on its face, I can make the argument that Hedman is the best defender on the defending Stanley Cup champions, and that matters; Doughty’s team isn’t going anywhere, but considering how dismal it is with him off the ice, the argument is that he’s been able to succeed in a very difficult environment.

But if a truly elite defender plays a ton of minutes and drives a lot of wins into the team’s place in the standings, the argument for Hedman in particular gets a little softer, and the argument for players like Makar, Theodore, and Fox a little bit stronger.

Ultimately this has the chance of being the tightest Norris race in quite some time. Hedman may be the oddsmakers’ favourite, but the competition behind him is as fierce as ever.