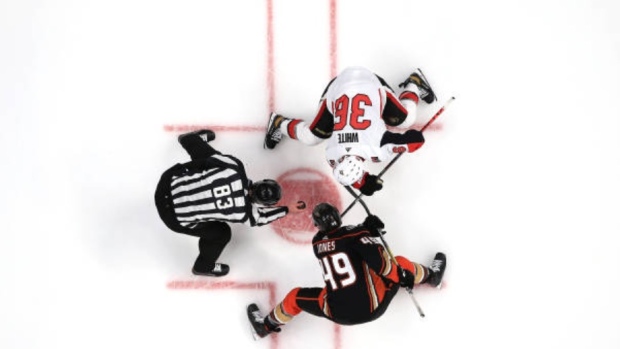 Performance in the faceoff circle has been a widely debated topic in hockey’s analytics community. It is a clear, obvious and measurable puck battle. But is it meaningful?

The debate over faceoffs isn’t so much about the merit of winning one. It is always better to win a draw than to lose it; that much seems obvious. But there have been exhaustive and futile efforts to draw a direct line between winning (or losing) a draw and the value (or adversity) it creates for a team. What complicates this sort of analysis is the numerous puck battles and hockey sequences that occur in the 10 seconds or so after the draw.

The truth is a team can be poor in the faceoff circle but great structurally after the draw, and vice versa. Teams can be great at winning defensive-zone draws and correspondingly breaking out; that talent may not transpose itself in the offensive zone if the team’s inability to create passing and shooting lanes after the draw is ineffective.

There are other complicating factors at play as well, like the sheer parity in faceoff performance around the league. Once again last season, the vast majority of regular centres had a faceoff percentage between 44 and 56 per cent – that spread shrunk to 46 to 54 per cent at the team level. 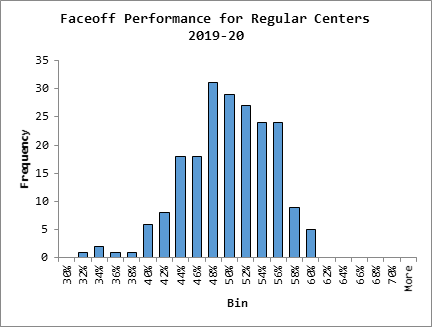 At any rate, this is why attempts at quantifying the impact of winning or losing faceoffs – consider Gabriel Desjardins’ work a decade ago, or Hockey Graphs’ 2015 assessment for two quick examples – have been relatively futile.

Efforts to magnify and enhance all of the NHL’s play-by-play data have improved over the years, and we now have much stronger insight into what is happening over a given period of play.

Let’s focus on the Ottawa Senators (50.3 per cent last year in the circle) for a moment. Three centers – the traded Jean-Gabriel Pageau, Chris Tierney, and Colin White – took about two thirds of the team’s draws last season, and it is likely Tierney and White will own the lion’s share of that work heading into the upcoming season.

By the numbers, Tierney was okay in the circle and White was bad. Both paled in comparison to Pageau, who was sent to Long Island at the trade deadline:

Just off the faceoff data, we would expect Tierney and White to both have struggled generating expected volume after offensive-zone draws. We would also expect to see serious divergence in the defensive zone – Tierney won more than half of his draws, while White was more than eight percentage points in trail. For a player like White, a developmental piece the Senators organization wants to see more out of in his third professional season, it seems like a real area of focus.

But is it? Let’s take a look at Tierney and White in the defensive zone, and what happened after all of the respective faceoffs taken when they were on the ice. For context, Tierney’s common linemates last season were Anthony Duclair and Connor Brown, while White’s were Tyler Ennis and Brady Tkachuk.

Plots brought to you by NaturalStatTrick:

We know that Tierney was a net winner in the defensive circles, and White was a clear loser. Yet Ottawa was substantially better in the shift after a White draw.

You can see that the inability to win a high volume of defensive-zone draws neutered what Ottawa could do offensively in the first 15 or so seconds after a draw, but beyond that, the Senators were fantastic at flipping the ice and creating offence. In fact, White’s line was so good at it that by the end of the shift, there was near convergence between the quality of shots taken by the opponent and the quality of shots taken by Ottawa, with White out-performing both other lines in Ottawa and average forwards around the league.

As for the goodness created from Tierney’s faceoffs? Not much there. The team actually gave up more dangerous offence in the opening 10 seconds after a Tierney draw (despite him winning a disproportionately higher amount of draws than his teammate White), and the team was much weaker at transitioning the puck and getting on the attack.

There are any number of variables that might explain why this is occurring – teammate quality, opponent quality and score effects are certainly at the top of the list. And even after reading this piece, you can still reasonably conclude that Tierney is a better faceoff guy than White.

But this is where necessary video review comes into play. While Tierney and company were ineffective in turning those draws into something meaningful, White and his linemates were able to (unexpectedly) make magic.

Secondary puck battles are happening all over the ice, and those puck battles at aggregate tend to be much more important than the singular one that happens in the faceoff circle. The more we understand on that front, the better our understanding of true player impact will be.