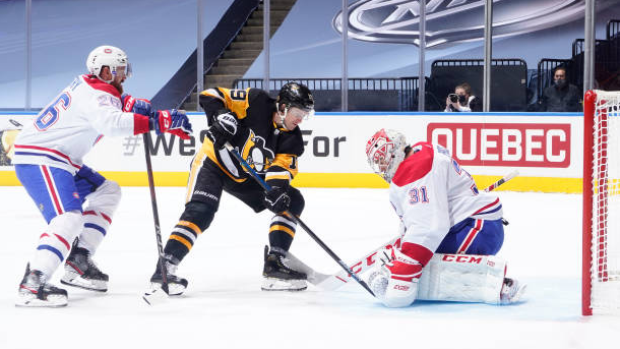 Montreal Canadiens goalie Carey Price is turning back the clock, which could be a problem for the Pittsburgh Penguins.

It is, in a word, unexpected. Price has been an outstanding goaltender since entering the National Hockey League more than a decade ago, but at 32 years old and with a ton of miles on his body, cracks have started to form.

Price was playing like a high-end starting goaltender – arguably one of the best in the league – as recently as the 2016-17 regular season. In the four seasons since then, he ranks 28th in save percentage (91.3 per cent) and 52nd in goals saved above expectations when adjusting for shot quality. Over that time span, Price has dealt with injuries and increasingly underwhelming skating talent in front of him.

So there was understandable skepticism – on the heels of another mediocre regular season – that Price could put it together in time for these playoffs. It didn’t help that the Canadiens drew the Penguins, probably the most talented team featured in the play-in round.

Montreal and Pittsburgh have split the first two games, but the Canadiens would surely be facing elimination right now without Price’s heroics. The ice has been tilted in favour of Pittsburgh, and in Game 2 it turned into a shooting gallery in front of Price.

Consider not only the area of the ice Pittsburgh’s opportunities were coming from, but also the sheer shot disparity between the Penguins and the Canadiens:

Price stopped 94.9 per cent of shots (78 shots against) in the first two games, which is comfortably the highest stop rate of any goaltender through the opening weekend. Although he conceded four goals (Sidney Crosby twice, Jason Zucker and Bryan Rust), that’s about twice as good as we would expect from a league- average goaltender.

His performance amongst his peers, at least so far, speaks for itself:

It is certainly possible that Price has, by random chance, strung together a couple of high-quality games. But this is the inherent risk of a short series – a talented goaltender finds his game at the right time, underpinning what could end up being a possible series upset.

But if Montreal is to pull this upset off, they are going to need more from the skaters in front of Price. Remember, this is a Canadiens team that finished 13th in goal percentage at 5-on-5 this year, outscoring their opponents 147 to 142 (+5). Their play at 5-on-5, in fact, was the only reason this team reached the qualifying round in the first place.

Part of the good story about how well Price has played is also a bad story about how the rest of the team has played in front of him. They may be just one goal down in differential, but they are down six in expected goals, 12 in high-danger chances, and 56 in sheer shot attempts.

I said last week that Montreal was playing with house money here and I still think that’s true – an upset in the first round would be well received, but the more likely scenario is this team enters the lottery queue for a 1 in 8 chance to select Alexis Lafreniere in the entry draft.

But Price appears determined to torture Penguins shooters in the process. And maybe, just maybe, Montreal can recreate the magic from Game 1 and find a way to pull off a shocking upset.