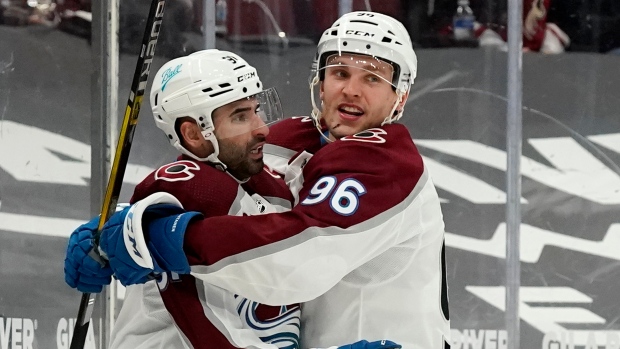 Have the Colorado Avalanche positioned themselves as Stanley Cup favourites?

That honour has belonged to the Tampa Bay Lightning for the past few seasons – an ultra-deep, uber-talented team devoid of an obvious hole in the lineup. But the second tier of competition has been talented for a while now, offering the opportunity for an emergent team to build out the rest of their roster and challenge the Bolts.

If we look at the past three years of performance, you can see how tightly clustered the challenger group has been behind Tampa: 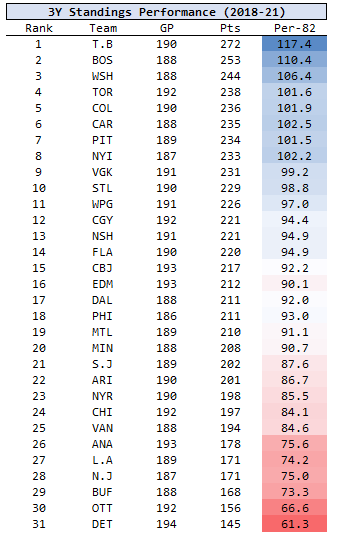 Some of these teams are in different life cycles – the Boston Bruins and Washington Capitals have been outstanding during this run, but their competitive window really is right now. Younger teams like the Toronto Maple Leafs, Carolina Hurricanes and Avalanche have been similarly competitive, but on an upward trajectory year-over-year.

All three of those organizations have been exceptional this season, but the Avalanche are starting to establish themselves as an outlier in comparison to the rest of the league.

Colorado certainly plays in a top-heavy West Division that offers up a few bottom-feeders for them to pick apart. But they are also facing a serious challenge from a fellow Cup contender in the Vegas Golden Knights, and the Minnesota Wild may be the league’s most improved team.

At any rate, we are witnessing some of the most impressive team-level performances in a long-time.

First, let’s consider how the Avalanche compare to the rest of the league in five key measures – the first three specific to their ability to dominate the run of play at even strength, the other two addressing productivity when on the power play or penalty kill.

The Avs are (by a considerable margin) the most dominant even-strength team in the NHL this season, and only the Carolina Hurricanes have an argument as a better net special teams performance thanks to their punishing power play: 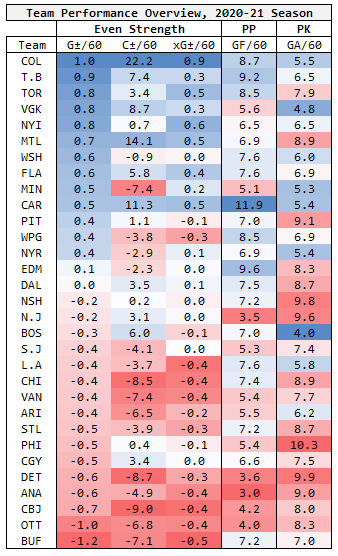 Perhaps the most fascinating thing about this Avalanche team is they no longer are heavily reliant on the Nathan MacKinnon line to drive scoring. MacKinnon (15 goals and 32 assists) and Mikko Rantanen (22 goals and 24 assists) are still a two-headed scoring machine, but the Avalanche already have 10 skaters – including star defencemen Samuel Girard and Cale Makar – with at least 20 points on the season.

Each line that head coach Jared Bednar has tried this year has won the goal battle, and the three regular lines have done so on a sustained basis over hundreds of minutes:

Every part of this team looks Herculean in a way where it’s hard to see – save perhaps a series against the Lightning – where the Avalanche would be underdogs in the betting markets.

One of the reasons that’s the case? If you compare Colorado this season to some of the most dominant teams during the statistical modern era of the NHL (> 0.75 goals better than their opponents per 60 minutes of play, 2007-21), you find that they are only with a few peers, and most of those teams won the Presidents’ Trophy, the Stanley Cup, or both: 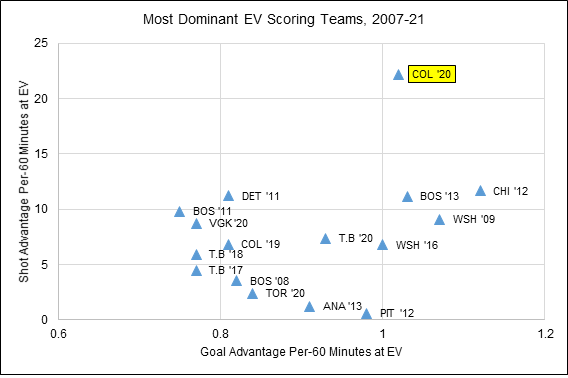 What’s not lost on the Avalanche organization is that credible competition is as stiff as ever. Three other teams – including the Lightning, Maple Leafs, and one-year division rival Golden Knights  – are similarly pummelling teams from a goal-differential perspective.

But no team has been able to drive such punishing shot differentials for such a lengthy period, and we have seen how that puck-possession dominance can put talented and productive teams on their heels in a way that’s without parallel. If you don’t believe me, ask the Arizona Coyotes. Then ask them again.

The top of the NHL may be as strong as it’s ever been. But there is a credible argument to be made that this is becoming Colorado’s Cup to lose based on how in control they have been through the duration of the regular season.