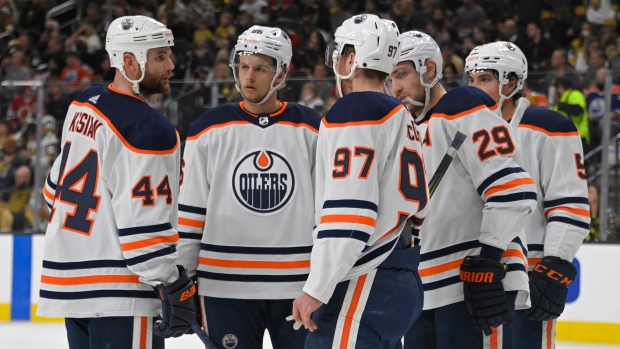 What has happened to the Edmonton Oilers?

That’s the question around Oil Country right now, and for good reason.

The Oilers, who grabbed the National Hockey League’s pole position in the early part of the season, are struggling of late.

The team is 4-6-0 in their past 10 games, losers of five straight, now tied for 12th in full-season goal differential. The team is still well-positioned in the Pacific Division, but with the Vegas Golden Knights getting healthy and baseline improvement in the California teams, tougher questions are being asked.

Coming into the season, the Oilers knew that if they could check three key boxes, they would be positioned for a Stanley Cup run. In no particular order:

- The team needed to see defensive improvement with their big guns on the ice. Connor McDavid and Leon Draisaitl are perhaps the two deadliest attackers in the league and have been for some time, but it hasn’t amounted to the type of net-goal dominance you would expect. By way of quick example: McDavid, inarguably the best player in the world, had a trailing three-year goal differential of +24 at even strength. That’s 70th percentile across qualified skaters.

- An extension of the same point: the goaltending department is vulnerable and has been for a few years. The organization, invested at other positions heading into this season, opted to run it back with veterans Mikko Koskinen and Mike Smith. Stuart Skinner, in Smith’s absence, has seen rotational time as well. The plan here wasn’t for greatness but rather respectability.

- Edmonton’s depth players needed to be a factor. Perhaps the most exhausted discussion of the last decade, the Oilers have never been able to figure out a lineup that doesn’t get killed when its best players are on the bench. It’s an area the organization attacked the past two summers.

Twenty-six games into the regular season, I think it’s safe to say point one has been satisfied and point two is at least up for debate. McDavid and Draisaitl again lead the league in scoring, with a blistering power play to boot. They also have turned those goals-against numbers around – Draisaitl, for example, is tied for 15th best in the league in net goals at even strength, tied with players like Florida’s Alex Barkov.

And then there’s the depth, which has been utterly and routinely crushed – increasingly so as the season has progressed.

Let’s use Draisaitl’s on/off minutes as a quick example of such. The below shows cumulative net-goals and expected net-goals since the season opener. Look at that slide: 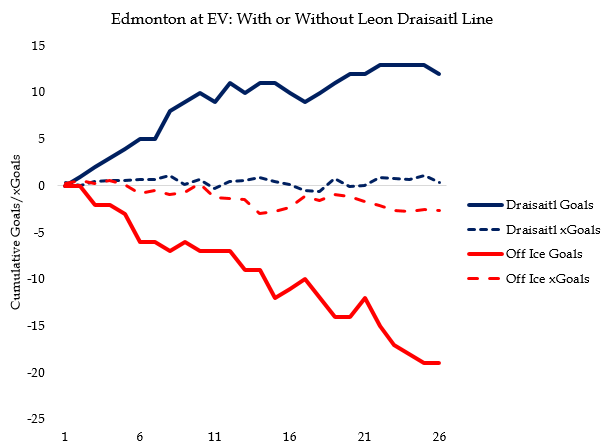 You expect your best and highest-paid players to drive big goal differentials. That’s exactly what Draisaitl and his line are doing. We see a similar effect when isolating for shifts from the McDavid line versus the rest of the lineup.

But you can only play your star players so much. Draisaitl and McDavid carry two of the highest usage rates in the entire league, seeing a whopping 37 per cent of available Oilers’ even-strength minutes. Add that to the power-play units they carry, and you have situations where both forwards are playing defenceman-like minutes, easing into the mid-20s most nights.

That’s a ton of time for Edmonton to win, relative to other teams and their respective star players. But it’s still, relatively, a small piece of the pie. It’s a zero-sum game, and if McDavid and Draisaitl are seeing 36 per cent of even-strength time, that’s an awful lot of minutes the Oilers must win without their help.

Said another way: the breadth of performance within the Oilers’ lineup is starting to be of concern. Of the 25 players at 50 minutes or more this season, they have just four other players – Jesse Puljujarvi, Ryan Nugent-Hopkins, Kris Russell, and William Lagesson – above water in goals. Most of the roster is underwater. In the cases of players like Derek Ryan (-13), Warren Foegele (-7), Philip Broberg (-7), and Colton Sceviour (-6), by a considerable margin.

In a hard-cap league, it’s hard to invest everywhere. The Oilers rightfully wrote blank cheques to both McDavid and Draisaitl, knowing it would handcuff their ability to be aggressive in the market and force them to be savvy buyers and strong developers of their own players.

There is plenty of time to right the ship. But you cannot win a Stanley Cup (or a division title for that matter) when your depth players have been outscored by 19 goals over the course of 26 games. And once again, every game that Edmonton’s big guns do not win is at high risk of becoming a loss – look no further than the dismal effort against a deeper Carolina team on Saturday for an example of such.

Edmonton needs answers down the lineup, and quickly.