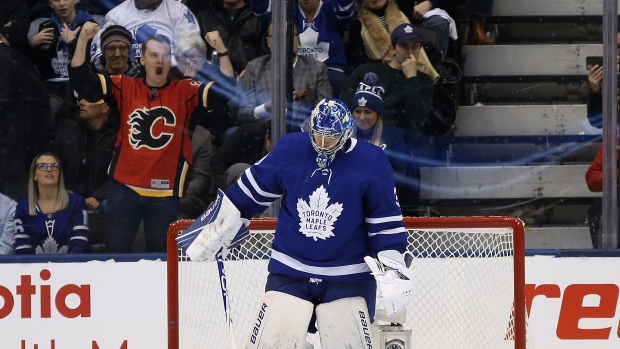 As optimism grows concerning the National Hockey League’s intention to return in January for a reported 56-game regular season, so too does the consternation over critical roster decisions. The runway from the start of the regular season to both the trade deadline and the 2021-22 off-season is going to be short. Decisions must be made quickly.

One of the more interesting decisions needs to be made in Toronto, where there is continued hope of a Stanley Cup bid. Like a dozen or so teams around the league, the Maple Leafs have spent aggressively towards the cap ceiling, banking on league growth rates to create cap space in future years. The only problem was that a global pandemic struck, siphoning away critical gate revenue and forcing a flat cap for at least 2020-21.

Andersen is a bit of a lightning rod in Toronto. He has been a reliable stopper of the puck since entering the league with Anaheim in 2013-14, but he is also coming off his worst season and is part of a team with pervasive performance issues on the defensive end.

There is another complicating factor: A league-wide talent influx at the position means more capable goaltenders are available each year in free agency. Right now, next off-season’s list could include Tuukka Rask, Jordan Binnington, Antti Raanta, and Philipp Grubauer.

Bringing this back to Andersen, although we can’t quite say what his cost base might be due to the economic uncertainty, we can get a feel for what type of contributor he has been and what future projections of performance may look like.

If we look at his performance measures over the last five years, we can grade him out against his peers accordingly: 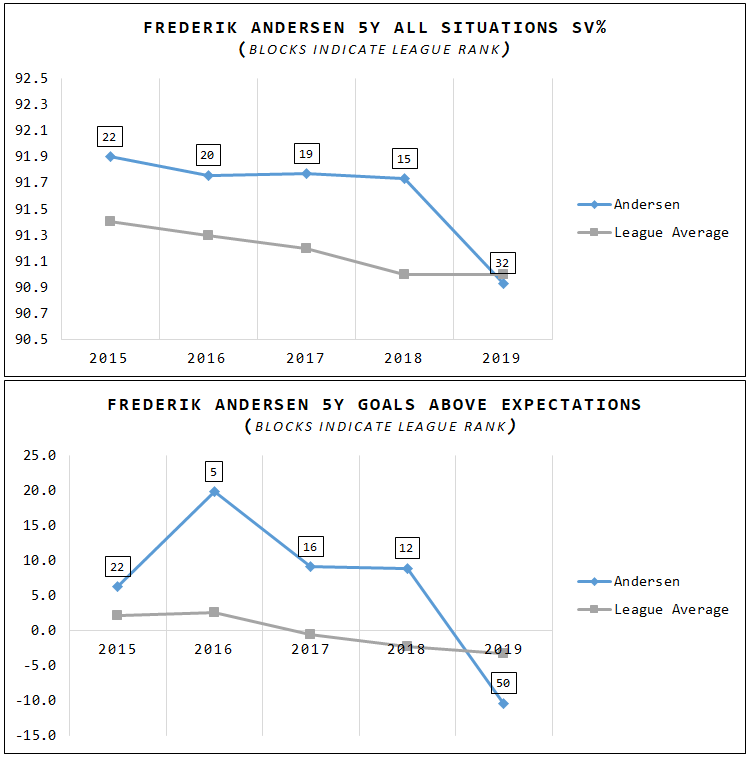 Raw save percentage (easy to measure, but plagued by team effects) and goals above expectations (harder to measure, but recognizes the varying difficulty goaltenders face through a combination of shot volume and shot quality against) tell a consistent story in Andersen’s case. He’s been an above-average option in net for Toronto over the past five years, generally grading better than two-thirds (or more) of his peers.

The one exception just so happened to be last year, where Andersen finished with save percentages comparable to Alex Stalock of the Minnesota Wild and current free agent Ryan Miller. Adjustments for the quality of those shots do not improve the story. Evolving Hockey’s regression-based model had Andersen 11 goals worse than we would expect from an average goaltender in the same position, placing him just ahead of Anaheim’s John Gibson and the currently unsigned Craig Anderson.

The good news for Toronto is the 2019-20 season – disastrous as it was – won’t be the last we see of Andersen in Toronto. The Maple Leafs will likely get at least 30 more games from the Dane to see if last year’s performance was an outlier or indicative of the start of declining play.

Before last season, Andersen was as predictable and reliable a goaltender as you could find in the league – not the most dominant of options, but a guy who routinely would provide value at the position. But there is little doubt last year’s campaign has complicated matters enough for Toronto; doubly so with limited internal options in the case of an emergency. Is he really beginning an age-induced downswing, or was it just a multi-month slump?

Not an easy question to answer for the Maple Leafs organization, and turning to video doesn’t help a ton either. Andersen had his share of miscues handling the puck and taking himself out of position, but Toronto’s defence was notorious for ill-timed turnovers and indifference to closing off opposition passing lanes. Andersen wasn’t the only problem for the Maple Leafs, but he was a problem.

If Andersen can rebound this season and put last year into the “one-off” category, Toronto will surely consider an extension. But if last season was a harbinger of what’s to come, the Maple Leafs are going to be another team busy in the goaltending market.