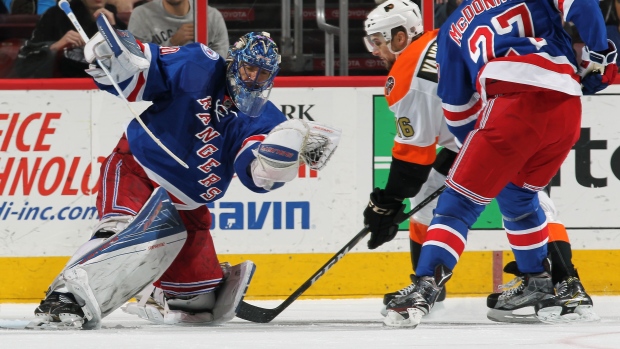 Yes, scoring is up in recent years in the National Hockey League and it has become a more offensively prolific league, relatively speaking. But the last decade has still offered its fair share of incredible goaltender duels – a few of which are already part of hockey lore.

With hockey paused for a presumably extended period of time, I went back and dusted off nearly 12,000 regular-season games from the start of the 2010-11 season through March 11, 2020. Every game was scored through three criteria – the number of shots (or, workload) respective goaltenders faced, the stop rates of the goaltenders cumulatively, and the goals saved above expectations (expected goals net actual goals) to capture shot quality.

The two most compelling games based on these criteria both came, coincidentally enough, from the 2013-14 regular season – the first involving a duel between Jimmy Howard and Henrik Lundqvist, the second involving Ryan Miller and Craig Anderson. But there was plenty of competition from other years: 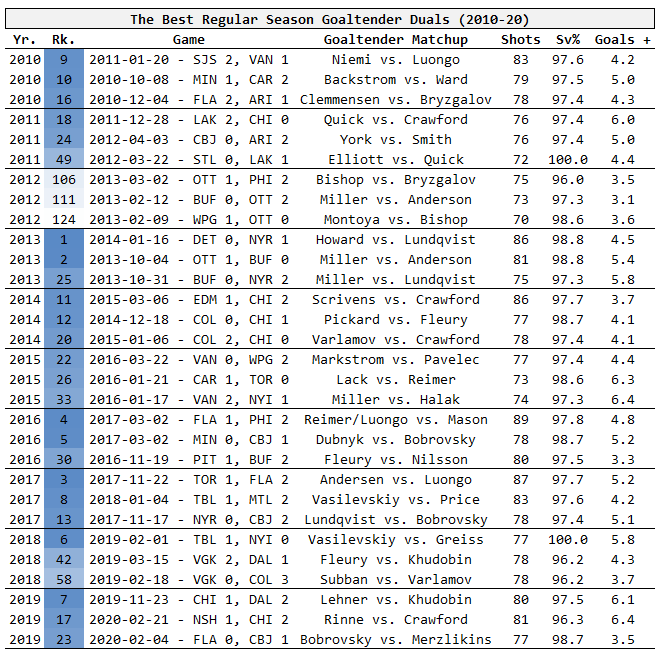 The winner, by the narrowest of margins, was the aforementioned Jan. 16, 2014 game between the Detroit Red Wings and New York Rangers. A third-period goal by Mats Zuccarello – the only goal scored in the game – gave the Rangers the regulation victory, but the performances of Howard (stopping 47 of 48 shots) and Lundqvist (a 38-save shutout) stole the show.

That game was really about the sheer volume of shots that both goalies had to turn away, and how effective they were in doing so. But if you were curious about the game that saw the biggest swing between actual goals scored and expected goals, that honour belongs to Nashville’s Pekka Rinne and Chicago’s Corey Crawford from this season. The Feb. 21 game saw Rinne and Crawford concede three goals – the game winner going to Blackhawks forward Alex DeBrincat in overtime – but on a base of far more difficult shots.

I went back and pulled the heat maps of where shots were emanating from between the likes of Nashville and Chicago. This is, in one word, insane – and this is just an even-strength sampling (via HockeyViz).

It’s not surprising to see Chicago involved in a game where a fantastic goaltender performance erased an otherwise distressing defensive performance – that has been, after all, Chicago’s calling card for the past few seasons.

But that wasn’t the only game that registered for the Blackhawks this season. Three months prior, Robin Lehner – prior to his trade to Vegas – battled with Dallas’ Anton Khudobin in an eerily similar “defence optional” type of game.

More generally: as you start thumbing through the games, you are reminded of how flush the NHL has been with elite goaltending over the past decade. Goaltenders like Miller (four), Crawford (four), Lundqvist (three), Marc-Andre Fleury (three) and Sergei Bobrovsky (three) have been household names for quite some time, and each has participated in a number of exceptional performances over the past 10 seasons.

And with a stroke of luck, we may get a few more memorable goaltending duels before this season truly comes to a close.