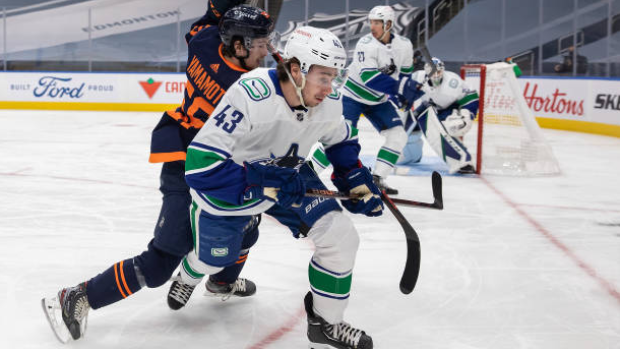 How many players in the National Hockey League currently lead their team in scoring and are also dead last in goal differential?

One. That player is 21-year-old Vancouver Canucks defenceman Quinn Hughes, who is off to a rather bizarre start to the 2020-21 season.

Hughes’ offensive production looks an awful lot like his impressive rookie season, where he had eight goals and 45 assists in 68 games. The Vancouver blueliner has 18 points (two goals, 16 assists) to lead the Canucks in scoring through 18 games. Some of that offence has been supplemented by the man advantage, but Hughes is second on the team in even-strength scoring, trailing only forward Brock Boeser.

Said another way: If a scoring play manifests from the Vancouver side, it’s likely Hughes is involved. Hughes has recorded a point on 33 per cent of Canucks’ goals this season, one of the highest numbers observed in the league for a defenceman: 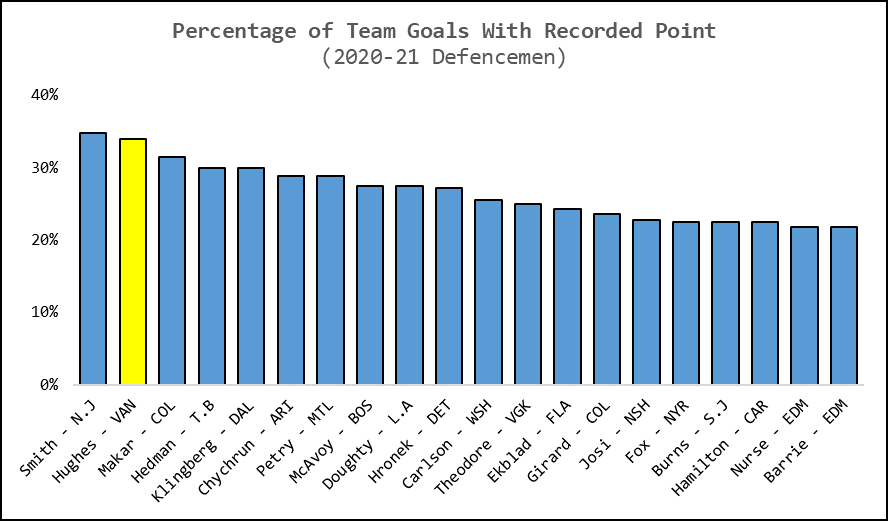 The 18 points accumulated so far put Hughes in a tie for fourth place league-wide, which is remarkable for a defenceman, even this early into the regular season. There are just three defenders who lead their team in scoring through Sunday’s games. That short list also includes Montreal’s Jeff Petry and New Jersey’s Ty Smith.

What’s particularly unique about all of this scoring is that being on the ice and contributing to all of these goals hasn’t helped Hughes’ on-ice goal differentials in the slightest. 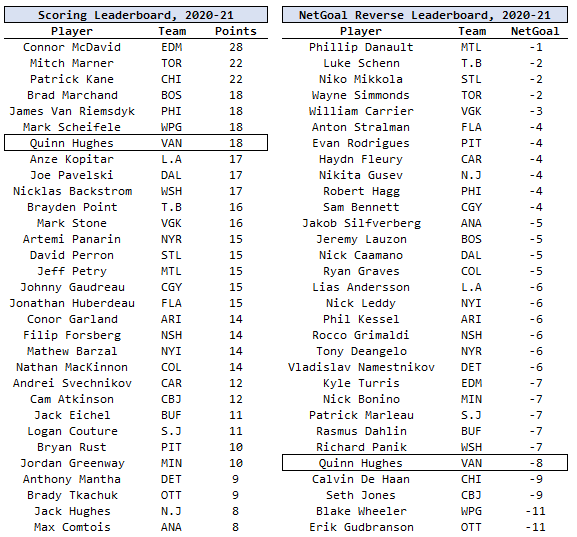 There is basically only one way to get on both of these leaderboards at the same time, and Hughes has cornered that market. There are three components to this recipe:

- Be involved in most offensive scoring sequences across all game states? Check.

- Get substandard goaltending whenever you are on the ice? Check.

The goaltending part is the most interesting by far, if only because the question in the Canucks organization right now is whether the skater group is contributing adversely to the performance of Braden Holtby and Thatcher Demko, or if the two netminders have been the ones anchoring overall team play.

For Hughes, that’s an important question. Though Vancouver’s team save percentage at even strength is quite poor (89.9, 29th in the NHL), it’s worse when Hughes is on the ice. The Canucks are stopping just 87.7 per cent of shots with Hughes, which is sixth lowest among qualified defencemen. (The clubhouse leader, for reference, is Pittsburgh’s John Marino at 85.7 per cent).

Those are woeful stop rates – the type of stop rates that would hinder the performance of the best players in the world.

Remember Erik Karlsson in his final year in Ottawa? The player widely regarded as the best offensive defenceman of this generation – and maybe the best offensive defenceman ever during his prime playing years – was burned by shoddy goaltending in his final season with the Sens. Despite scoring at nearly a point-per-game pace, Karlsson finished the year 17 goals in the red at even strength.

We generally do not hold an individual skater accountable for his team’s save percentage. There is very little repeatability in the data, and so on-ice save percentages can be very fleeting. Think about Hughes just last season, a rookie who saw his goaltenders – that year including Jacob Markstrom and the aforementioned Demko – stop 90.5 per cent of shots with him on the ice, right near the league average!

But the volatility of save percentages alone may not explain players in extreme circumstances. Bringing this back to Hughes in 2020-21, consider the shot profiles that Holtby and Demko have faced with Hughes on the ice. Last season, Vancouver was a shade worse than league average in the defensive zone with Hughes on the ice – shot volume wasn’t particularly high, but the shots attackers did generate came from dangerous areas.

This year? Shot volume has sizably increased (+10 per cent) with Hughes on the ice, and those shots continue to come from the low and high slot area (via HockeyViz): 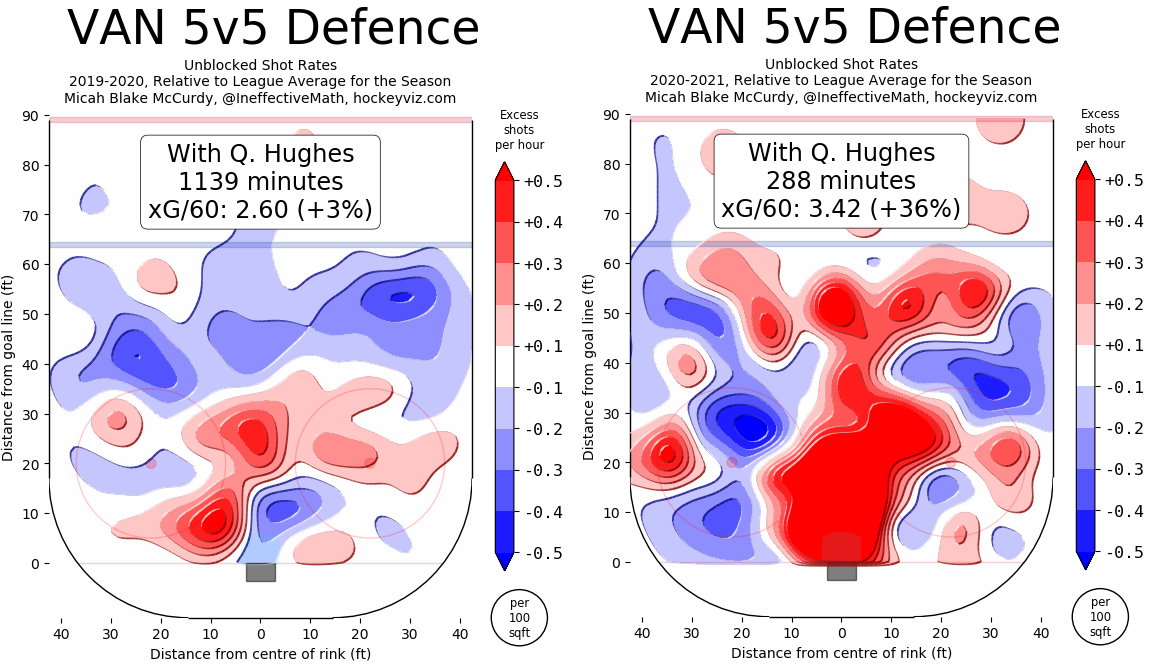 Hughes is part of a broader unit responsible for the wanting defensive play while he’s on the ice. The luxury of being as talented as Hughes is means you get to play with some of the best players the organization can offer – this season, that means heaps of minutes with Boeser, Elias Pettersson, J.T. Miller, Bo Horvat, and Jordie Benn.

This group has found their scoring touch, but they have offered little so far by way of tenable defensive play, and it’s compounding a bigger goaltending issue that, quite frankly, is keeping Vancouver outside of the playoff picture.

I do expect the Canucks – and Hughes, specifically – to start getting a bit more defensive puck luck. The goaltenders, at some point, will start to make some stops.

But if the Canucks are going to take another step forward, cleaning up some of the ugly early season defensive play has to be a priority. Hughes (and others) may have been victimized by poor play between the pipes, but it’s not as if they have been airtight in front.

Until that changes, the Canucks are going to be fighting an uphill battle in a competitive North Division.