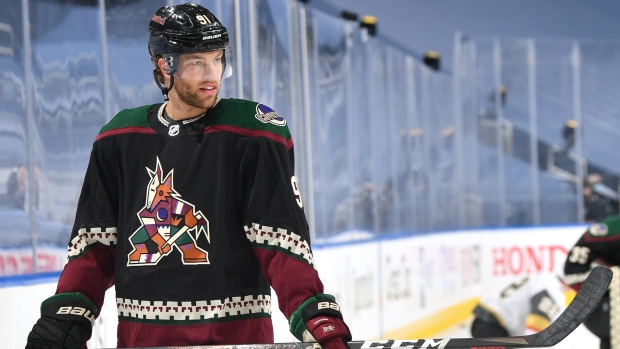 To say the 2020 version of free agency had little precedent is probably an understatement. The ongoing pandemic has really stung at the National Hockey League’s bottom line, and the business uncertainty facing teams around the league has had a substantial chilling effect on the market.

That’s not to say that players and teams aren’t figuring out ways to get deals done – the opposite, in fact, appears to be true.

The player’s perspective is particularly interesting because incentives have started to change. Some players have actively chased job security. Others, perhaps a group more optimistic about the future and willing to bet on themselves, have signed short-term deals to try and catch free agency at another time. We have seen household names like Taylor Hall, Sam Reinhart and Tyson Barrie sign one-year deals, effectively punting on free agency for another year.

On the other side of the table, front offices are starting to feel serious financial squeeze. The cash-poor teams that were already hurting before the stoppage of the 2020-21 regular season have been predictably quiet in the market. But so too have some of the bigger-market teams, those that tend to spend aggressively to the salary cap on an annual basis.

With such cap inflexibility, most of the teams that had the cash to offer big-name free agents held out. And in the lone instance where a team was able to offer the moon – the Vegas Golden Knights brought in defenceman Alex Pietrangelo on a lucrative seven-year, $61.6 million deal – the move was preceded by a series of cap casualties, including the trading of defenceman Nate Schmidt and forward Paul Stastny.

Year to year, there will always be volatility in how the market behaves. One of the obvious drivers of that is talent at a position level. Three years ago, teams spent wildly on an impressive free agent class for defencemen. This year, the goaltender market was flush, with a number of teams in need of addressing the position.

But at aggregate, it becomes clear that players have been materially impacted by the economic uncertainty, and the class has signed comparatively cheap deals: 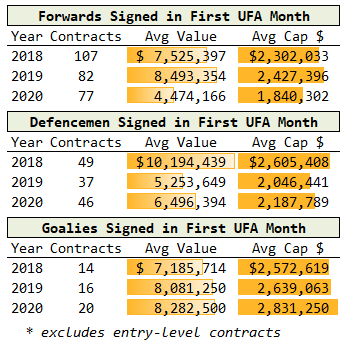 The forward class, year over year, saw a 50 per cent reduction in the total value of their contracts. If we use $20-million as a baseline for a high-value contract, only two forwards – Brendan Gallagher and Josh Anderson, both of whom inked in Montreal – would qualify this season, and Gallagher’s contract was an extension a year before contract expiry. Eleven forwards (headlined by Artemi Panarin’s $81-million contract in New York) would have qualified in 2019; the year before that, 10 (John Tavares, $77-million).

Perhaps the most important data point for the players more broadly though is term length. If we look at the length of the contracts signed over the past three years, the average term dropped from about 3.5 years in 2018 to just 2.7 years in 2019. If you look at term of contract signed by number of years, the shortening of contracts becomes obvious: 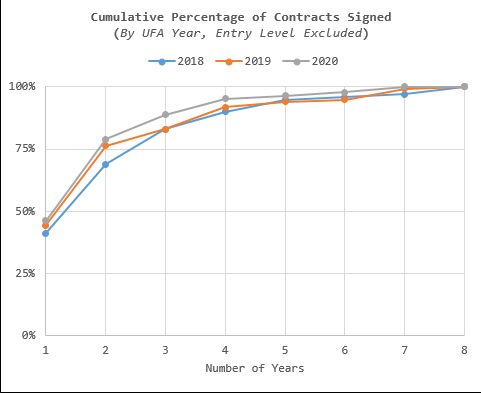 No one in particular benefits from this type of off-season. Teams are being much more conservative with their cash, but most of that is borne from substantial revenue headwinds last season and grim revenue forecasts still on the horizon.

This is not breaking news, but owners tend to prefer making money to losing money. And players, of course, like when the league is profitable. They share in hockey-related revenue and linearly benefit from growth through their paycheque.

We all expected a tough October for this free agent class, but I’m not sure how well tuned in the hockey community is to the size of these pay cuts the players have taken.

More than that, you have to wonder if this sort of economic shift will last longer than 2020. We are already anticipating a substantially impacted regular season that may include an all-Canadian division and tremendous doubt about next year’s gate revenue – gate revenue that may even be non-existent in certain markets.